Have Enough Minefields to Deal With, Don't Want More: Rajan 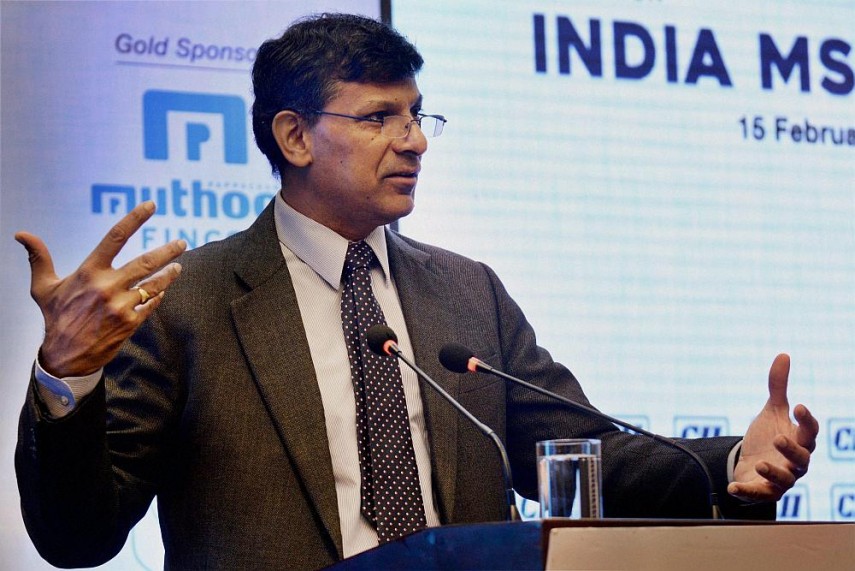 With his comments often sparking one controversy after another, Reserve Bank Governor Raghuram Rajan has said he has got "enough minefields to deal with" and does not want to add to this list.

Known for his frank views on all pressing issues, Rajan created a major controversy back home recently by using a famous Hindi saying 'andhon mein kaana raja (one-eyed is king in the land of blind)' while referring to India being touted as the 'bright spot in a gloomy economy'.

Earlier, his comments on intolerance and various other issues have also triggered controversies while he has been of late facing heat from some BJP leaders demanding refusal of any extension to him at RBI. Rajan's current 3-year tenure as RBI Governor will end this September.

At an interaction here at Chicago Booth School, London, Rajan said in reply to a question seeking his views on 'Brexit' that he does not want another 'minefield' for him.

He was asked for his views, with people who want to leave the European Union often citing example of India as a country with whom Britain might do very rapid trade deals.

"You have asked me a Brexit question in a way that I should possibly be able to answer," Rajan replied invoking a peal of laughter from the audience.

However, he proceeded further to present his view on the issue.

"Let me say on the Brexit question, I think what is really very interesting and energising is that everybody is talking about it, everybody is coming with their studies and their analyses. So, I think you have enough people here talking about it and you would reach a decision whatever it is. So, I don't want to add my two-cents to that."

Prodded further that whether people from economics were being very one-sided in their studies in this regard, Rajan told the moderator, "You are getting me again", invoking another round of laughter.

"Let me say that there are very responsible organisations doing these studies. But as with any economic study, ultimately it depends on whether they are driven by pure economics... (and) what does it mean actually for my salary, my bottomlines. Or, are they driven by other forces which we understand less... Various political attitudes, nationalism and so on...

"I think this is a minefield. I don't want to... I have enough minefields to deal with," he said.

After his 'one-eyed king' remark triggered a major controversy, Rajan devoted his entire convocation lecture last month at the National Institute of Bank Management in Pune to contextualise his comments.

Stating that growth is just one measure of performance, Rajan said India is still one of the poorest large countries on per capita basis and he cannot get euphoric if India is the fastest-growing large economy.

At the same time, he also called for efforts to improve public dialogue, saying "Speakers have to be more careful with words and not be gratuitously offensive. At the same time, listeners should not look for insults everywhere and should place words in context so as to understand intent".