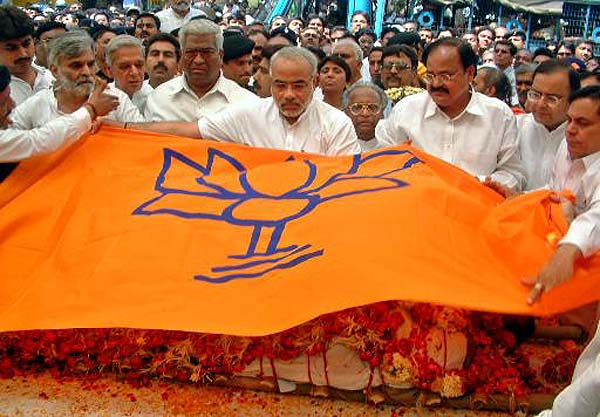 *FILE* Narendra Modi covers the body of the slain former Gujarat home minister Haren Pandya with a BJP flag as Venkaiah Naidu and Arun Jaitley look on before the funeral in Ahmadabad on March 27.
AP Photo File

"After eight years, I have lost patience and this judgement (Aug 29) has proved that the real killers of Haren (Pandya) are roaming free while some other persons have been put behind bars and have wrongly served the prison term," said Jagruti Pandya.

Terming veteran BJP leader Lal Krishna Advani as a "father figure", Jagruti said, "I want to urge Advanji that as a widow of his senior party worker, to ensure that the BJP and he (Advani) lend support in quest for justice for Haren".

Gujarat High Court on Monday dropped murder charges against the 12 accused of killing former minister Haren Pandya in 2003 by upholding a trial court's verdict convicting them of criminal conspiracy and terrorism under the Prevention of Terrorism Act (POTA).

Jagruti said she had yet to receive response from Chief Minister Narendra Modi over her plea for fresh investigation into the case.

"I had earlier written a letter to chief minister Narendra Modi seeking his co-operation for re-investigation into the case but I have not received any reply from the CM on the issue," she said.

Appealing Modi to ensure that real culprits of the murder be behind bars, she said "now, after this verdict the chief minister should declare my quest for justice as his cause. He should prove himself to be an ideal chief minister by ensuring that real killers are caught and punished".

"I along with my two sons, and all BJP workers of Gujarat are eagerly looking forward to the CM to own up this cause for justice," Jagruti said, adding BJP should take up the matter as its own fight.

Pandya, former minister of state for Home in BJP government, was shot dead on March 26, 2003 near Law Garden area of the city while taking a morning walk.

He was initially said to be close to Modi but had developed differences with him in a later stage.

According to CBI, which investigated the case, Pandya was murdered to avenge the 2002 communal riots.

When asked if she still had faith in Modi who did not reply to her earlier demands, Jagruti said "I trust Modi."

While seeking support to her quest for justice, she pointed out in her appeal to Modi and Advani that her husband was killed when BJP was in power in Gujarat and also at the Centre.

"Entire BJP party and its family members are eagerly looking forward to Modi to catch the real killers of Haren. When this is done, people of Gujarat will believe that it is possible to get justice in Gujarat," Jagruti said.

Expressing her agony over the motive behind the killing, she said, "if I don't believe in the CBI, what do I do, I have to keep faith in the justice system".

"In 2003, when my husband was killed, it was a shock for me. As a simple housewife, I was burdened with the sole responsibility of my kids who were 6 and 13 years old. I had suddenly become both father and mother for them," she added.

Replying to a query whether her husband's killing was a political murder, Jagruti said that she did not believe so.

When reminded that her father-in-law late Vitthal Pandya had always maintained that it was a political murder, Jagruti said "it was his personal opinion as father of Haren".

Jagruti said she would seek her own recourse as per law if Modi and Advani did not agree to her appeal.