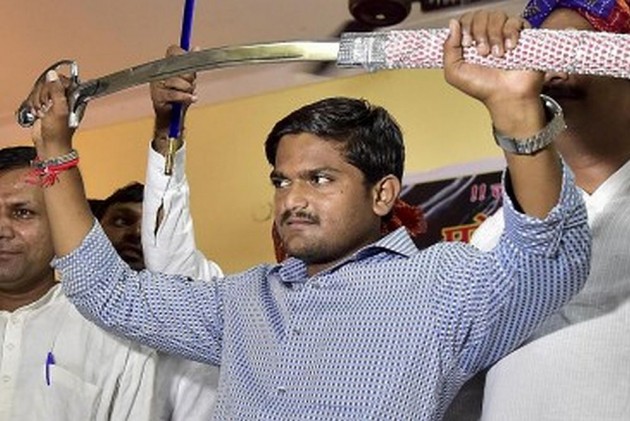 Patel quota leader Hardik Patel today returned to Gujarat after spending six months away from his home state and received a grand welcome from his supporters at Ratanpur on the border with Rajasthan.

The 23-year-old leader, who had shifted base to Udaipur, left for Gujarat along with his supporters in four vehicles and entered the Gujarat border without incident, SP Udaipur Rajendra Prasad earlier told PTI.

Hundreds of Patel community youths welcomed Hardik as he entered his home state through the Ratanpur border this afternoon. He then headed to Himmatnagar town of Sabarkantha district to address a rally of Patel community.

Upon his arrival, Hardik vowed to get justice for his community. "I bow down to this land of great leaders and martyrs. I will always fight for my community to give them justice," he said.

Asked about his future strategy, he said, "Strategy is meant to be executed when time comes, I cannot reveal it now."

The firebrand leader, who is facing sedition charges, was released on bail by Gujarat High Court on July 15 last year on the condition that he will stay outside the state for six months, starting July 17. He had been staying at Udaipur in Rajasthan since then.

Commenting on the development, Gujarat Chief Minister Vijay Rupani said his government is ready to hold talks with Hardik and other stakeholders on the issue of reservation.

"We have given him permission to hold the rally (in Himmatnagar). We are always ready to hold talks in a positive atmosphere with all the stakeholders to resolve various issues," Rupani said.

The Hardik Patel-led Patidar Anamat Andolan Samiti (PAAS) has described today's rally as "the start of the second round of the Patel quota agitation."

In August 2015, Hardik had addressed a massive rally at GMDC ground demanding inclusion of the community in the OBC category for quota benefits.

After addressing the rally today, Hardik will reach Gandhinagar to seek blessings of former Gujarat Chief Minister Keshubhai Patel. In the evening, he will leave for Pune to take part in 'Bharatiya Chhatra Sansad'.