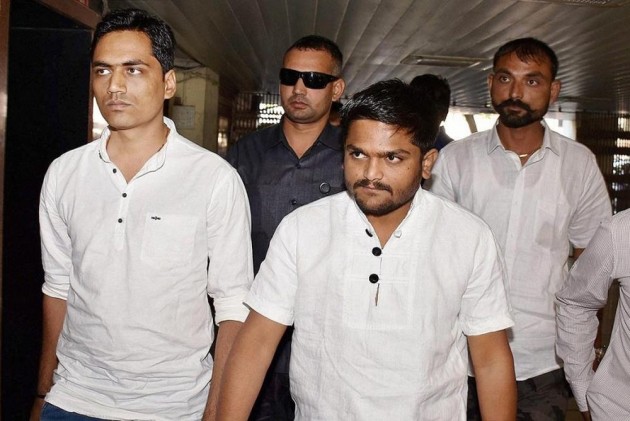 Quota agitation leader Hardik Patel and 12 of his supporters could not surrender in a police station in a rioting case today as the investigating officer was out of station.

Patel had yesterday announced that he along with 12 others, who were named in the FIR, will surrender before the City Crime Branch today in connection with the rioting and arson case.

He was also supposed to appear before the crime branch today as part of his bail condition in the sedition case registered here.

"As part of his bail condition, he was supposed to appear before us every Monday. Since Ramol police had also registered a case against him recently, which was later transferred to the crime branch, Hardik asked us to arrest him and others.

"However, since the IO of that case is out of station, we told them that we will do it later," Assistant Commissioner of Police (ACP) B C Solanki said.

On March 20, Ramol police lodged a rioting and arson case against Hardik and 59 other Patel quota agitators for creating ruckus outside the house of BJP corporator from Vastral in the city, Paresh Patel.

Ramol police have arrested 13 persons till date in connection with that case. Later, the probe was transferred to City Crime Branch, said Police Inspector of Ramol, Paresh Solanki.

While coming out of crime branch office after signing the register, Hardik told mediapersons that he will not get intimidated by such "new cases" filed against him.

"The government can not stop me from raising my voice by filing such new cases or putting me behind bars again. My fight will continue.

"Even if the BJP wins the upcoming Assembly polls, our fight for reservation will continue," said Hardik who is facing sedition cases in Ahmedabad and Surat.

As per the condition put by the Gujarat High Court while granting him bail in the cases in July last year, he needs to appear before Ahmedabad crime branch and Surat crime branch once every week.