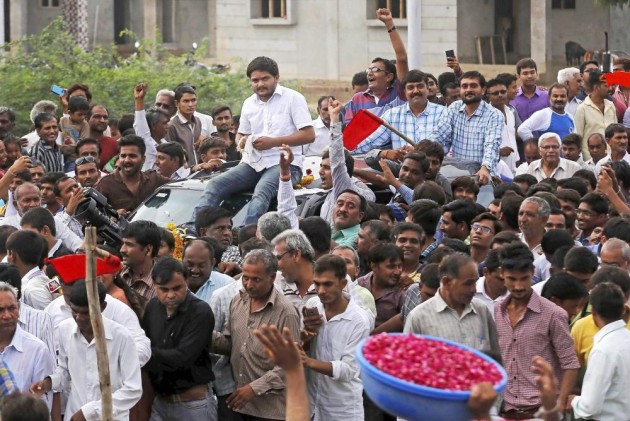 The 22-year-old Patidar leader, who will leave for Udaipur in Rajasthan tomorrow, where he will stay for the next six months, told reporters at a road show that he was not interested in politics and working for his community is what matters to him the most.

After stepping out of the Lajpore Jail in Surat around 11 am yesterday, Hardik had said that he would continue his agitation to get reservation for his community under the OBC quota. During his road shows today, he once again made it clear and said they have prepared a plan to revive the stir.

After his arrival in Ahmedabad from Surat last night, he was greeted by hundreds of supporters. Aam Aadmi Party (AAP) members and leaders, including Ashutosh and Kanubhai Kalsariya, tried to meet Hardik, but could not do so due to the huge crowd around him.

"Our attempt to meet Hardik was not successful due to huge crowd that turned out to greet him late night as he reached Ahmedabad," an AAP member said.

This morning, Hardik reached his hometown Viramgam, where he offered prayers at the temple of his family deity and met his family members. He was given a hero's welcome by the members of his community.

Hundreds of supporters accompanied him as he left for Sarangpur in Botad district, where he prayed at Lord Hanuman temple. At Lathidad village on the way, villagers weighed him in donated blood on a weighing scale as a show of solidarity. They also gifted him a sword.

Speaking to reporters on the way, Hardik, who was nine months in jail in connection with two sedition and one arson- related casea during the agitation, said he is not a political person.

"We are receiving amazing support. Thousands of people have turned up. I carry the trust of our community members and I am working for their cause...I am not a political person and politics is not important for me, what matters is our work for our community members," he said.

Late this evening, Hardik reached Khodaldham in Rajkot district, where he offered prayers at a temple before reaching Rajkot, where he held a road show. The district administration imposed section 144, banning large gatherings in Rajkot as a precautionary measure to avoid any law and order problem.

Members of the Patidar Anamat Andolan Samiti (PAAS), an organisation led by Hardik, said he will continue with his road show tomorrow at Patan before leaving for Udaipur, where former Congress MLA of Rajasthan Pushkarlal Patel, invited him to stay at his house during his stay outside the state.

While granting bail to Hardik in two sedition cases last Friday, the HC had asked him to stay outside Gujarat for the next six months.

Hardik's mega rally on reservation held in Ahmedabad on August 25 last year had sparked violence killing ten people, including a policeman besides causing damage to public properties and vehicles across Gujarat.