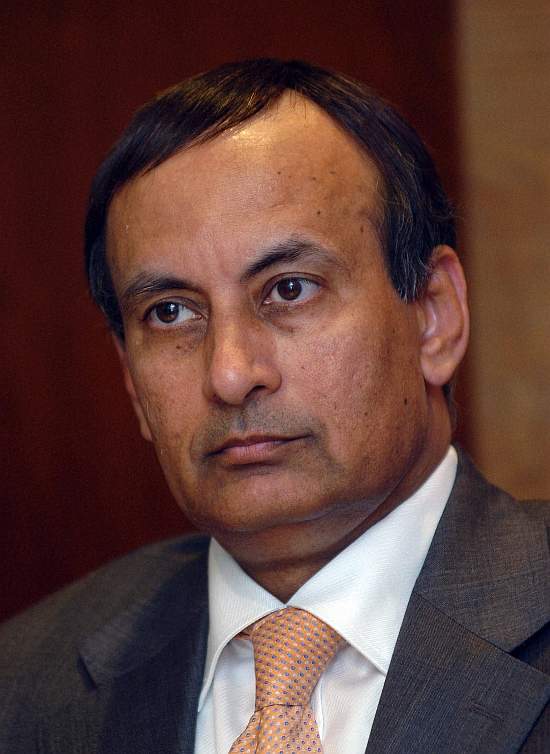 This picture taken on April 8, 2008 shows Pakistan's Ambassador in Washington Hussein Haqqani during a news conference in Islamabad, Pakistan. Pakistan's envoy to the United States says he has resigned over claims he wrote a memo to Washington askin
AP/PTI

outlookindia.com
-0001-11-30T00:00:00+0553
Pakistan's ambassador to the US Husain Haqqani was today forced out of office over his suspected role in a secret memo seeking American help to prevent a possible coup in Pakistan, which had angered the powerful army.

Summoned home three days back, Haqqani was asked by Prime Minister Yousuf Raza Gilani to quit when the envoy met the country's top civilian and military leadership to explain his position on what the media is describing as the "Memogate" controversy.

The ouster of Haqqani, 55, considered close to President Asif Ali Zardari indicated that in the tussle between the civilian government and the armed forces over the confidential memorandum, it is the latter that prevailed.

Gilani directed authorities to conduct a "detailed investigation at an appropriate level" and asked Haqqani to "submit his resignation so that the investigation can be carried out properly", said a spokesman for the Prime Minister's House.

State-run PTV reported that Gilani sought Haqqani's resignation so that a "transparent inquiry" could be conducted into the memo issue.

The envoy's resignation had been accepted, it said.

Haqqani too announced his resignation in two messages posted on Twitter.

"I have requested (Prime Minister) Gilani to accept my resignation as Pakistan Ambassador to US," Haqqani said in a message shortly after he met the country's top civilian and military leadership to explain his position on the memo.

"I have much to contribute to building a new Pakistan free of bigotry (and) intolerance. Will focus energies on that," he said in another post on Twitter.

The spokesman for the Prime Minister's House said "all concerned would be afforded sufficient and fair opportunity to present their views and the investigation shall be carried out fairly, objectively and without bias".

"As a result of the controversy generated by the alleged memo which had been drafted, formulated and further admitted to have been received by authority in USA, it has become necessary in national interest to formally arrive at the actual and true facts," the spokesman said.

Reports have said that the powerful military has been pressuring the civilian government to remove Haqqani since Pakistani-American businessman Mansoor Ijaz claimed he had drafted and delivered the memo to former US military chief Admiral Mike Mullen in May on the instructions of the envoy.

Haqqani had dismissed Ijaz's claims and said he was considering legal action against the businessman.

The memo made public by Ijaz said the Pakistan government had sought US help to stave off a military coup in the wake of the American raid that killed Osama bin Laden in the garrison town of Abbottabad on May 2.

The memo further said the government would revamp Pakistan's national security set-up by removing elements with links to militants.

Haqqani had earlier said he was ready to resign to defuse the crisis.

US Ambassador to Pakistan Cameron Munter today said his country was prepared to help in any investigation into the memo if it was asked to do so.

Critics of the military establishment and analysts have questioned Ijaz's contradictory statements on the memo and his reasons for making it public.

Ijaz has also come under scrutiny for his claims in the past that have been debunked by the US administration.

Earlier, Haqqani insisted that he had played no role in drafting the memo, Haqqani had said: "His (Ijaz's) entire harangue is aimed at pitting the civil and military administrations against each other and sowing the seeds of discord."

However, Haqqani said some people considered his opinions wrong because they had an "anti-American bent of mind". He said he loved Pakistan while Ijaz was talking about "teaching Pakistan a lesson".

Haqqani questioned whether it was fair to point fingers at him and "give credence to the accusations of someone who wanted to teach Pakistan a lesson and to dub its army and ISI terrorist organisations".

He contended that Ijaz's "tenor was anti-Pakistan".

Haqqani said even if all of Ijaz's claims were correct, the businessman still had no answer to the question of why he had disclosed a secret document.

He asked the media to consider why a non-entity like Ijaz, whom no one from the media had ever met, was now giving several interviews a day.

"If Mansoor Ijaz is so important why has no American channel bothered to interview him and why are all his efforts aimed at stoking psychological warfare against the people of Pakistan?" Haqqani asked.

"I have been involved in politics since my student days. I was always attracted by democracy. My thinking may have changed but the heart never changed. It beats only for Pakistan," he added.

Meanwhile, Ijaz has started changing his stand and claimed President Asif Ali Zardari had no role in the memo controversy.

Former US military chief Mike Mullen has confirmed that he received the memo but said he took no action on it.