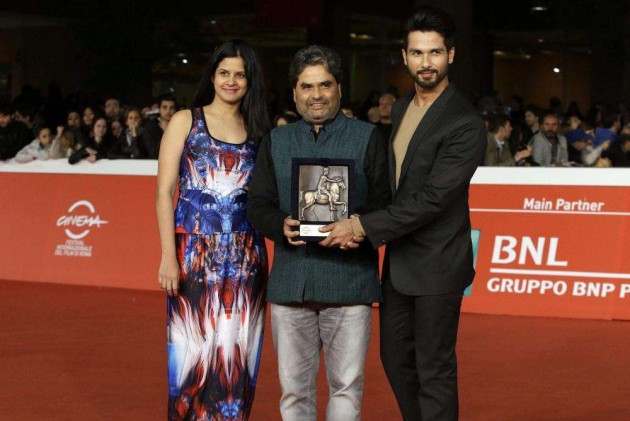 Vishal Bhardwaj's latest project Haider, an adaptation of William Shakespeare's tragedy Hamlet, has bagged the People's Choice Award in the world category at the ninth edition of Rome Film Festival.

The film, which is set in the backdrop of Kashmir, stars Shahid Kapoor, Shraddha Kapoor, Tabu, Irrfan Khan and Kay Kay Menon in pivotal roles.

Shahid, 33, who attended the festival with Bhardwaj, took to Twitter to announce the same.

"1st festival 1st win. Too much. Wowzaaaa. People's choice in the main category at the Rome film festival... A first for an Indian film. #haider. Proud and humbled," Shahid, who played the titular role in the film, tweeted along with a picture of him and Bhardwaj.

Shraddha, 25, who could not make it to the festival in Rome, also tweeted about her excitement.

"We WON! #Haider - the 1st Indian film to win the main category of people's choice award at Rome film festival! So humbled, grateful and proud!," she wrote.

Haider released on October 2 worldwide and marked the third installment of Bhardwaj's Shakespearean trilogy after Maqbool and Omkara.