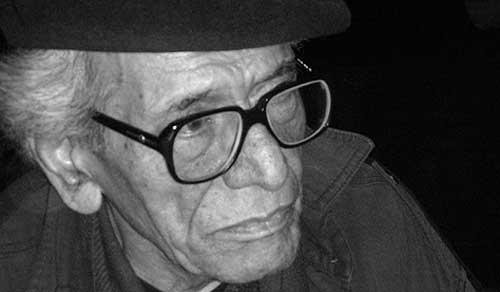 The theatre legend died at about 0630 hrs IST at the National Hospital, where he was admitted three weeks back after he complained of breathing problems and was put on a ventilator, family sources said.

His daughter Nageen was at his bedside when the end came.

A multi-faceted personality, Habib Ahmed Khan adopted the pen-name 'Tanvir' when he began writing poetry at an early age.

Born on September 1, 1923 at Raipur, Tanvir passed his matriculation from Laurie Municipal High School, Raipur and completed his BA from Morris College Nagpur in 1944.

After pursuing his Masters degree for a year at Aligarh Mulsim University, Tanvir moved to Bombay and joined All India Radio (AIR) Bombay as a producer in 1945.

While in Bombay, he wrote songs for Hindi films and even acted in a few.

He joined the Progressive Writers' Association (PWA) and became an integral part of Indian People's Theatre Association (IPTA) as an actor.

Later, when most prominent IPTA members were imprisoned for opposing the British rule, he was asked to take over the organisation.

His play Charandas Chor that was first produced in 1975 got him the Fringe Firsts Award at Edinburgh International Drama Festival in 1982.

In 1959, he founded the Naya Theatre in Bhopal and it is set to complete 50 years this year.

In 1954, he moved to New Delhi and worked with Qudsia Zaidi's Hindustani Theatre and also worked with Children's theatre and authored numerous plays. It was during this period he met actor-director, Moneeka Mishra, whom he later married.

Later in the same year, Tanvir produced his first significant play Agra Bazar, based on the work and time of the plebeian 18th century urdu poet, Nazir Akbarabadi, of Mirza Ghalib's generation.

In this play he used local residents and folk artists from Okhla village in Delhi with students of Jamia Millia Islamia creating a palette never seen before in Indian theatre, a play not staged in a confined space, rather a bazaar, a market place.

This experience with non-trained actors and folk artists later blossomed with his work with folk artists of Chhattisgarh.

In 1955, Habib moved to England where he trained in acting at Royal Academy of Dramatic Arts (RADA) and in direction at Bristol Old Vic Theatre School (1956).

For the next two years, he travelled through Europe, watching various theatre activities.

One of the highlights of this period, was his eight-month stay in Berlin in 1956, during which he got to see several plays of Bertolt Brecht, produced by Berliner Ensemble, just a few months after Brecht's death.

This proved to be a lasting influence on him, as in the coming years, he also used local idioms in his plays, to express trans-cultural tales and ideologies.

This gave rise to a "theatre of roots", which was marked by an utter simplicity in style, presentation and technique, yet remaining eloquent and powerfully experiential.

A deeply inspired Habib returned to India in 1958 and took directing full-time.

He produced Mitti Ki Gaadi, based on Shudraka's Sanskrit work, Mrichakatika and it became his first important production in 'Chhattisgarhi'.

There was no, turning back from there. It led to the foundation of Naya Theatre in Bhopal, along with his wife, Moneeka Mishra.

In his exploratory phase, 1970-73, Tanvir broke free from one more theatre restriction, he no longer made the folk artists with whom he had been performing all his plays speak Hindi, and instead switched to 'Chhattisgarhi', a dialect, they were more accustomed to.

Later, he even started experimenting with Pandavani, a folk singing style from the region and temple rituals, making his plays stand out amidst the backdrop of plays which were still using traditional theatre techniques like blocking movements or fixing lights on paper.

Soon spontaneity and improvisation became the hallmark of the new style, where folk artists were allowed greater freedom of expression.

A further evolution was seen in 1972 with his next venture with Chhattisgarhi Nach style, a play titled Gaon Ka Naam Sasural, Mor Naam Damaad, based on a comic folk tale, where an old man falls in love with a young woman, who eventually elopes with a man of her age group.

The technique had finally evolved to an accomplished form, by the time he produced his seminal play, Charandas Chor in 1975. This immediately created a whole new idiom in modern Indian theatre.

During his career, Tanvir acted in over nine feature films, including Richard Attenborough's Gandhi (1982).