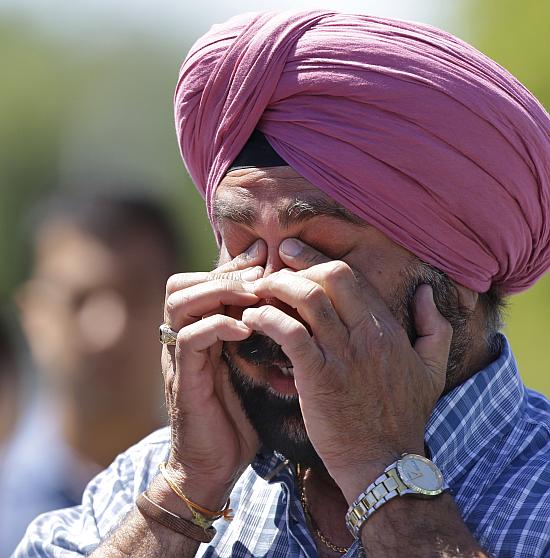 A man reacts outside the Gurudwara of Wisconsin in Oak Creek, Wis. where a shooting took place on Sunday, killing 7 people and injuring at least 25.
AP Photo/Jeffrey Phelps

outlookindia.com
-0001-11-30T00:00:00+0553
The FBI has launched a probe into the massacre of six people inside a Gurudwara in Wisconsin, described as the deadliest attack against the Sikh community in the US, as authorities termed the shooting spree of Wade Michael Page, the lone white gunman, as "domestic terrorism".

The second massacre in the country in three weeks has sent shivers down the spine of the Obama administration and the US' closely-knit Sikh community of about seven lakh.

The Federal Bureau of Investigation launched an in-depth probe into the shooting incident that unfolded at around 10:30 pm IST last night as members of the Sikh community were gathering at the 15-year-old Gurudwara in Milwaukee's Oak Creek suburb.

The army veteran gunman, who has been described to be in 40's and who could be a "skin head" or "white supremacist", walked into the Gurudwara and opened indiscriminate firing, killing six people, leading to speculation that the incident could be a case of racism.

In total three people were injured in the incident. The mayhem could have engulfed more people but for local police officers who shot dead the gunman, having many tattoos including a 9/11 one, even as one of them suffered serious wounds.

"It is the most deadly US attack on Sikhs - who often have been mistaken for Muslims and targeted in hate crimes - in recent memory," Milwaukee Journal Sentinel said.

"While the FBI is investigating whether this matter might be an act of domestic terrorism, no motive has been determined at this time," the FBI Milwaukee Special Agent-in-Charge Teresa Carlson said in a statement.

Fox News said, "Sources identified the dead suspect as Wade Michael Page, who was at one time attached to the Fort Bragg Army installation in North Carolina".

The FBI is working closely with the Oak Creek Police Department and other local and federal agencies to investigate yesterday's shooting incident, Carlson said.

"We know our community has been deeply impacted by this incident, and our thoughts are with those affected and particularly with the officer who was wounded in the line of duty to protect others," the FBI said.

Tattoos on the body of the slain gunman and certain biographical details led the FBI to treat the attack at a Milwaukee-area temple as an act of domestic terrorism, Los Angeles Times said quoting sources. Eyewitness have said that the shooter had a "9/11" tattoo.

Few details emerged about the man whose Cudahy duplex apartment was searched by police hours after the shooting.

The owner of the house that was searched described the tenant as a white, single, in his 40s and an Army veteran, the Journal Sentinel said.
ABC News as well as CNN, citing unnamed sources, said they were told that the shootings were the work of a "white supremacist" or "skinhead".

The US assured India that the tragic incident will be fully investigated, Indian Ambassador to the US Nirupama Rao said.

She said the US Deputy National Security Advisor John Brennan spoke to her from White House yesterday to convey "sincerest condolences" from US President Barack Obama.

"Mr Brennan assured me these tragic killings would be fully investigated, that Sikh community is precious part of fabric of American nation," she wrote on the micro-blogging site Twitter.

Soon after the incident, Obama reviewed the security situation with his top national security aides and called on Gurudwara trustee to offer his condolences.

"Michelle and I were deeply saddened to learn of the shooting that tragically took so many lives in Wisconsin," Obama said in a statement.

A law enforcement official told NBC News the gunman was dressed in a white T-shirt and black tactical-style pants, which had several pockets for holding ammunition magazines. He was armed with a single handgun, the official said.'

The carnage came as the nation is still reeling from a mass shooting two weeks ago in which a gunman killed 12 people and injured 58 at a movie theater in Aurora.

Sikh men tend to stand out because of their beards and colorful turbans and are sometimes confused with Muslims and viewed with suspicion.

After the attacks of September 11, 2001, there were scattered reports nationwide of harassment or attacks on Sikhs, including the killing of an unarmed man in Phoenix.