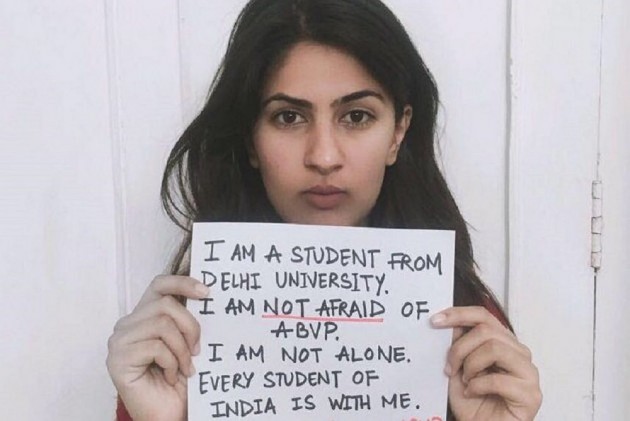 A Telangana BJP leader says Delhi University student Gurmehar Kaur is a representative sample on many campuses in the country, who are products of a failed education, parenting and social support system in India.

"There are many Gurmehar Kaurs in university campuses across India. This young woman is only a representative sample of a select section of young people, who are products of a failed education, parenting & social support system of a 70-year independent India", the state BJP spokesperson Krishna Saagar Rao said in a blogpost.

20-year-old Kaur has been subjected to intense trolling on social media over her stance against RSS-backed student body ABVP and for a video campaign advocating peace between India and Pakistan.

"One cannot expect not to face consequences for one's massive and controversial expression, in fact there will be equal and even larger reaction as a consequence...The abuse is certainly wrong, violent threats are certainly wrong, however,any other form of expression is clearly a natural recourse," Rao said.

"Terming that (intense trolling) as an attack on one's freedom of expression is juvenility, self pity, escapism and lack of ownership. If one is courageous, one must stand up and face the consequences of their expression".

Saying that attacking Kaur would not solve anything, he said "young people like her clearly reflect the collective social outcomes of a nation, which has never pro-actively designed its national identity and national values. The issue is much larger, it's national. It's a legacy issue of this country".

Attacking Congress, Rao said only a "vertically and horizontally divided India" suits the type of politics practiced by Congress party."

Rao said it is time for Prime Minister Narendra Modi to constitute a cohesive group of great individuals to initiate a proactive nation building exercise with well defined and empowering national values for unique national identity and pride of being an India, he said.