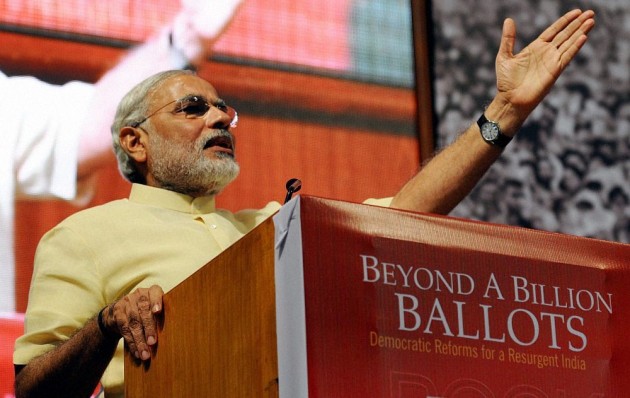 A political uproar erupted today over certain comments by Gujarat Chief Minister Narendra Modi on 2002 riots in an interview to Reuters, with many parties like the Congress, Samajwadi Party, CPI(M), CPI and JD(U) saying he had compared Muslims to a 'puppy' and should apologise for the "humiliating" remarks.

BJP, which was put on the backfoot by the comments, insisted that Modi's remarks had been "misinterpreted" with an aim of "appeasing a particular community".

What Modi actually said to Reuters on the 2002 riots

Is it frustrating that many people still define you by 2002?

People have a right to be critical. We are a democratic country. Everyone has their own view. I would feel guilty if I did something wrong. Frustration comes when you think “I got caught. I was stealing and I got caught.” That’s not my case.

Do you regret what happened?

I’ll tell you. India’s Supreme Court is considered a good court today in the world. The Supreme Court created a special investigative team (SIT) and top-most, very bright officers who overlook oversee the SIT. That report came. In that report, I was given a thoroughly clean chit, a thoroughly clean chit. Another thing, any person if we are driving a car, we are a driver, and someone else is driving a car and we’re sitting behind, even then if a puppy comes under the wheel, will it be painful or not? Of course it is. If I’m a chief minister or not, I’m a human being. If something bad happens anywhere, it is natural to be sad. [The Reuters translation was of Mr Modi's remarks in Hindi: “Hum agar car chala rahen hain… aur koi drive kar raha hai aur hum peechhe baithe hain, phir bhi ek chhota kutte ka bachcha bhi car ke neeche aa jata hai, toh humein pain feel hota hai ki nahin? Hota hai.”]

Should your government have responded differently?

Up till now, we feel that we used our full strength to set out to do the right thing.

Absolutely. However much brainpower the Supreme Being has given us, however much experience I’ve got, and whatever I had available in that situation and this is what the SIT had investigated.

Hitting out at Modi Congress demanded that he immediately apologise to the nation as his words are "totally against the idea of India."

'Perverse Mindset'
"Thousands of people were killed in the communal riots in Gujarat in 2002 and in the backdrop the analogy used by Narendra Modi needed to be strongly condemned. There is no place for such a comparison in a civilised India," party General Secretary Ajay Maken told reporters.
"It is reflective of his perverse mindset. It is totally against the idea of India. We are unable to understand as to what is the intention of raising such things before the elections," said Maken, who is the head of the AICC Communications department.

Samajwadi Party spokesman Kamal Farooqui took strong exception to Modi's comment that even "if a puppy comes under the wheel" of a car, he would be sad.

"It is a very sad, very humiliating and very disturbing statement... What does he (Modi) think, that muslims are worse than even puppies? He does not have a heart for them. He should feel sorry... He should apologise," Farooqui said.

"He (Modi) should be ashamed for using such a language," the SP leader said, adding, "the earlier he apologises, the better it will be. Otherwise, there will be dangerous consequences."

Attacking the Gujarat Chief Minister, CPI(M) leader Brinda Karat said, "the expression of regret just doesn't come to Modi....There is something wrong fundamentally what he is saying."

She said Modi "has been justifying that genocide in different ways. Whether it is a genocide, whether it is a cold-blooded murder, whether it is in the name of encounter, whether it is hushing up those cases and trying to promote those who were involved in it from beginning to end....It is a governance that has in it certain components which are against the Constitution of India and against basic human principles."

Shivanand Tiwari, leader of BJP's long-time former ally JD(U), slammed Modi and said "psycho-analysis should be done on him".

He added that it would be a "very dangerous situation if a person of such a person becomes the country's Prime Minister."

Tiwari also attacked Modi for saying he was "proud" to be a Hindu. "This statement means that Modi does not wish to take others along."

Senior CPI leader A B Bardhan said Modi cannot absolve himself of his responsibility as he was at the helm of affairs when the Gujarat riots took place.

"Modi was the Chief Minister of the state when riots took place. If this is how the chief ministers talk about their responsibilities, they are playing tricks with the people. They don't assume responsibility when the law and order breaks down. This cannot absolve him of the responsibility."

Referring to Modi's comments using the puppy analogy, Bardhan wondered whether the Gujarat chief minister was an innocent passenger in the car and that whether he did not know who was driving it.

"Was he an innocent passenger in the car? Who was driving the car. The chief minister sits in the car and he does not know who the driver is," Bardhan questioned, on why Modi has not been able to catch the real culprits behind the Gujarat riots.

SP Leader Naresh Agrawal said, "It is very clear who the culprit is. Anyone who is the culprit and which ever position he is occupying should be punished."

On his part, Modi tweeted:

In our culture every form of life is valued & worshipped. My original interview with Reuters http://t.co/4WNxHRFoS2 ...People are best judge

"In response to a question related to the unfortunate incident of 2002, Mr. Modi's response only shows a heightened sensitivity on his part where he chose an anecdote to explain the grief that a human being would experience on even the hurt of a dog," Modi's office said in a statement.

"To talk about an incident that resulted in loss of human lives and not feel the grief is unthinkable."

"His actual statement to this effect was - "it is natural for anyone who is human, in the first place, whether a Chief Minister or not, to feel aggrieved at such a loss," the statement concluded.

BJP spokesperson Nirmala Sitharaman sought to defend Modi, saying his comments had been "misinterpreted" completely, resulting in a "controversy where it does not exist".

Describing the controversy as "absolutely despicable", she said, "I appeal to all to read the interview in full and not to speak out of context. It is risky.

On the 'puppy' comment, she said Modi meant that anybody would feel sad even if a human being comes under a car.