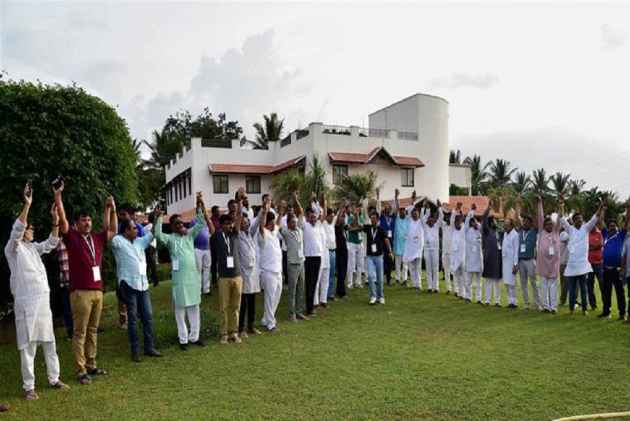 Print
A
A
A
increase text size
Outlook August 02, 2017 12:19 IST Gujarat Congress MLAs Holed Up In Bengaluru Resort To Get Lessons On Party's Achievements In 60 Years

Gujarat Congress legislators, camping at a private resort near in Bengaluru, are attending classes on a host of topics, including "the party's achievements in the last 60 years" and "the BJP's lies" among others, a Karnataka minister said on Wednesday.

The Congress had brought its 44 legislators in Bengaluru on Saturday, to fend off "poaching" attempts by the BJP ahead of the August 8 Rajya Sabha polls in Gujarat.

"Dr Suresh Sharma and Naushad Paramar of Jawaharlal Nehru Leadership Institute, New Delhi, will conduct classes on various issues for Congress legislators from Gujarat who are  camping at Bengaluru, for three days starting today," minister DK Shivakumar, who is overseeing the arrangements to keep the flock together, said in a statement.

"They will (be) taught on - what Congress achieved in 60 years, truth on corruption (charges) in UPA government, the BJP's lies and the truth, teamwork, media truths, and social media transparency and accountability," it said.

The move to hold the classes comes at a time when a few MLAs from flood-hit constituencies of Gujarat had reportedly expressed their intention to go back, worried about the public opinion going against them.

Earlier, the itinerary during their stay included  visit to some tourist destinations and religious places, which drew criticism as MLAs were accused of "abandoning" voters when their constituencies were facing nature's fury.

Whether the MLAs will undertake the tours or not was still unclear.

Six of the 57 Congress MLAs in Gujarat, from where senior party leader Ahmed Patel is contesting for the Rajya Sabha, have resigned from the party in the last few days with three joining the BJP on Friday.

The party has apprehensions over Patel's election prospects, if more MLAs defect.