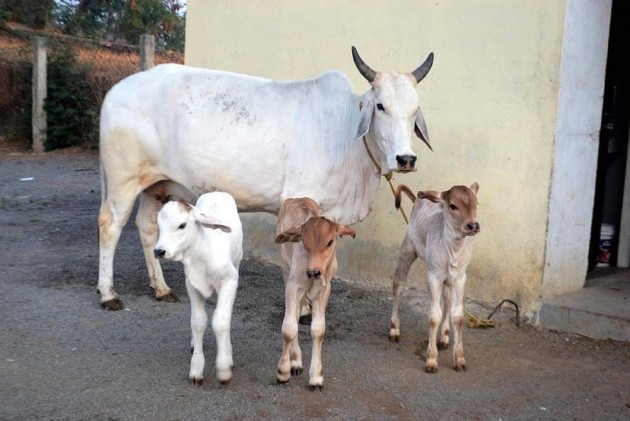 The Gujarat Animal Preservation (Amendment) Bill also has a provision for ten-year imprisonment for transportation, storage or sale of beef. It provides for permanent forfeiture of vehicles involved in transportation of progeny of cows and beef.

The bill also bans transportation of animals from one place to another in night.

The bill, which seeks to amend the Gujarat Animal Preservation Act, 1954, by introducing stringent punishments, was passed in the absence of Congress MLAs, who were suspended for a day for creating ruckus in the House.

Introducing the bill, state Home Minister Pradeepsinh Jadeja said, "Cows not just have religious significance, they also have an economic significance in our society. It is utmost necessary to increase the punishment to deter those involved in slaughtering of cows."

As per the bill, those involved in the slaughter of cows, calves, bulls and bullocks, would face imprisonment up to life, but not less than ten years.

In the present Act, which was amended in 2011, the maximum jail term for such acts was seven years, but not less than three years.

The bill also proposes imprisonment up to 10 years, but not less then seven years, for those found to be involved in transportation, sale and storage of beef. Earlier, the maximum punishment for the same was three years.

In 2011, when Narendra Modi was the Chief Minister of Gujarat, the state government had imposed a complete ban on slaughter of cows, transportation and selling of cow meat by amending the said Act.

Since then, the crimes related to cow slaughter in the state are covered under the Gujarat Animal Preservation (Amendment) Act of 2011.

Under this Act, those found involved in slaughtering cows and related crimes are fined Rs 50,000, besides the jail term up to seven years.

In another change, the Gujarat Animal Preservation (Amendment) Bill also proposes that all offences shall be considered cognisable as well as non-bailable. In the present Act, such offences are considered only "cognisable" and not "non-bailable".

To deter transportation of beef or bovine for the purpose of slaughtering, the state government has proposed to permanently "forfeit" vehicles .

At present, such vehicles are liable to be "seized" for a period of six months, or till the final judgement of the court, the Bill document said.