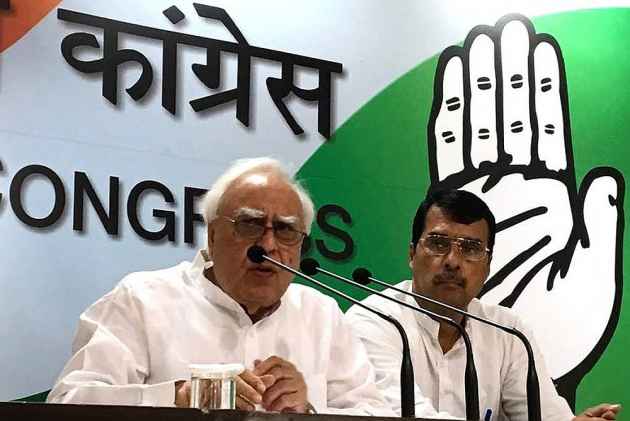 Senior Congress leader Kapil Sibal today said the GST was 'goodbye to simple tax' and not a 'good and simple tax' as described by the prime minister, stressing that it was good for the government and bad for the common man.

He said the advent of the GST had hit business hard, and small and medium traders across the country were facing harassment.

"The prime minister said this is a good and simple tax, our take on that is that it is a goodbye to a simple tax.

"The idea behind the GST is to have a simple tax which the UPA government also wanted. Here it is good for government and bad for the simple man," Sibal told reporters.

Training his guns on Prime Minister Narendra Modi, he said, "Whenever this government has taken a big step that changes the basic economic structure of the country, the people are upset and the prime minister travels abroad."

Sibal claimed "the launch of a multilateral GST was for the rich, by the rich and of the rich" and was against the interests of the poor and small traders who were facing anxious times due to unpreparedness of the government.

He said the Congress would press for the GST legislation as earlier envisaged by it and that will happen when its government comes to power at the Centre.

The former Union minister said the GST was not a one- nation-one-tax regime. He said it was painful that the state governments were entitled to levy municipal tax over and above the GST, as had happened in Tamil Nadu in the case of cinemas which was the only entertainment for the common man.

He also talked about Maharashtra imposing a 2 per cent tax on registration of new cars.

Citing a media report, he said private investment in India today was the lowest since 1992 according to the data of 1,000 non-financial firms.

"This is because of the economic situation which has brought the private sector to its knees and sapped the wherewithal to make that investment. They have taken data of 1,000 non financial private sector firms.

"The last time it was low in 1999-2000 when the BJP was in power and this is now a historic low as fact of the matter is that they are not concerned with business," he claimed.

The Congress leader said while there is no tax on sale of loose items, there was tax on packaged products like atta and biscuits which are consumed by the common man.

He said that earlier there was no tax on textiles and cloth merchants who have now been taxed at 5 per cent and this has rattled them.

Sibal said small cloth traders used to pay on credit but now do not have the capital and textile markets like the ones in Ludhiana are shut. The small traders who were unregistered, having less than Rs 20 lakh turnover, did not require it but now need to be registered if their sale is over Rs 20 lakh.

Citing an example of artisans in various trades, he said they used to do jobwork earlier but a person who buys from them has to pay tax and has to cut a self-invoice. They are questioning why they should pay tax as they do not get input credit, he said.

"For him the GST means to shun his family and the world. That is why I said it is a goodbye to a simple tax," he said.

He also lamented that the poor buy cosmetics and tax should not be imposed on such items used by the common man.

Sibal claimed there was politics in the GST as no frozen products were taxed, except cattle meat. Meat exporters, he said, are saying they will have to generate Rs 500 crore but he will be refunded that money, but the time limit is not set.--

"You imposed tax on cars. Tax on big cars have been reduced and prices have come down but tax has been increased on small cars. Air coolers also taxed. You were first hit by demonetisation and then by the GST," he said.

Sibal also said that the entire logistics business was shut, because they talked of introducing an e-way bill and all inter-state transport business is shut.

"Though octroi is shut, the trucks are standing," he said, adding that 50 per cent business has come down. He said transportation and textile sectors were hit.

He also said that exporters are not doing any business and the inventories are collected at the customs barriers as they do not know where will they get input credits.

The Congress leader said in export trade, one needs constant flow of capital which comes through constant business.

"If your inventories are locked up, you will not get back capital to put back into the business. It will affect your business. So, traders do not know how they are going to get input credit and when they will get it?" he asked.

He said people do not want more than Rs 75 lakh turnover as they will have to pay tax and they were bifurcating their firms into smaller ones in names of family members to avoid tax.