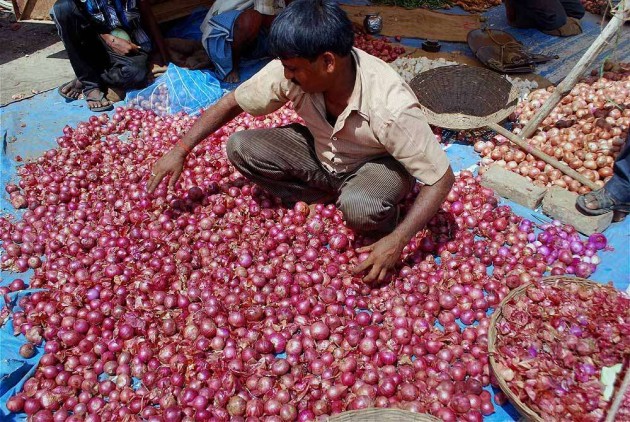 The Centre also directed the Delhi government and Mother Dairy to continue sale of onions at subsidised rates in the national capital till prices come under control.

A decision in this regard was taken at a review meeting chaired by Food and Consumer Affairs Minister Ram Vilas Paswan today.

The secretaries from Food, Consumer Affairs and Agriculture Departments as well as senior officials from the Delhi government and agencies like Nafed, SFAC and Mother Dairy were present.

"In addition to earlier imports, a further import of 1,000 tonnes of onions will be made in coming days to increase domestic availability and stabilise prices," Paswan told reporters after the meeting.

The Centre has already finalised two tenders for import of 2,000 tonnes of onion from China and Egypt. The first shipment of 1,000 tonnes is believed to have landed today and the commodity would be made available in the market by the month-end while the second shipment is expected first fortnight of the next month.

The third tender for import of 1,000 tonnes will be floated by the state-owned MMTC soon.

Noting that there has been a positive impact of market intervention by the Delhi government and retailer Mother Dairy in the national capital, Paswan said: "They should continue to procure onions from appropriate channels and supply through their outlets at subsidised rates."

Any difference in the cost for these operations would be reimbursed by the central scheme Prices Stabilisation Fund, he said.

Since last month, the Delhi government has been selling on a daily basis 60 tonnes of onions at a subsidised rate of Rs 30/kg while Mother Dairy is retailing 40 tonnes at Rs 38/kg, ensuring a total supply of 100 tonnes in Delhi.

Paswan also directed officials to keep a close watch on prices and initiate action promptly, if required. The state governments have been asked to take measures to check hoarding and control prices.

He also said the department is holding regular meetings with all stakeholders to take stock of the situation and evolve a policy strategy to keep a lid on prices, especially in Delhi.

Onion prices, both at retail and wholesale levels, have risen unabated due to shortfall in domestic production.

The prices at Lasalgaon, Asia's biggest wholesale onion market, are ruling as high as Rs 47-48 per kg while on the retail front, it has increased up to Rs 60-70 per kg across the country.