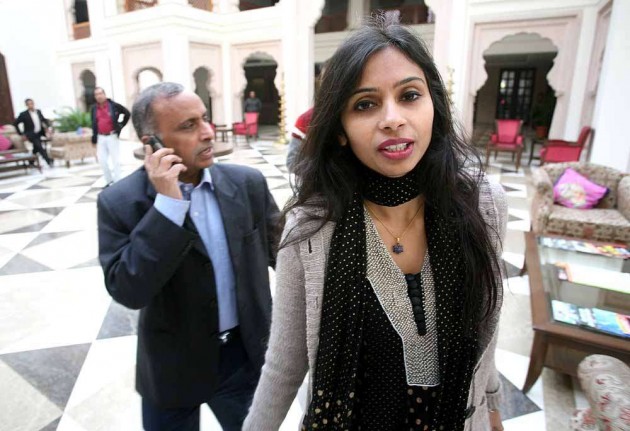 A disciplinary as well as an administrative action of "compulsory wait" has been taken against diplomat Devyani Khobragade, who had hit the headlines last year after she was arrested in the US in a visa fraud case, even as the foreign service officer remained defiant that she has not done anything wrong.

It is understood that a departmental inquiry into 40- year-old diplomat acquiring US passports for her children without informing the ministry has been concluded and has found that her action was "violative of conduct rules" leading to a disciplinary action has been taken. However, the nature of the action has not been disclosed.

Meanwhile, the External Affairs Ministry, which is believed to have initiated yet another inquiry into the issue of her talking to media without official permission, has put Khobragade on "compulsory wait".

She was a Director-level officer in the development partnership division of the ministry here after her return from the US in January.

However, the former Deputy Consul General of India in New York Khobragade asserted that she has not done anything wrong - be it taking dual passport for her children or talking to media.

Ruling out that she will resign after being put on "compulsory wait", she defended her action of taking the US passport for her two children, who were given diplomatic passports at the time of her posting to America, saying under the service rules, minor children can have two passports and there was nothing wrong in that.

Also justifying talking to media, the diplomat said it was very much under the ambit of her service rules which provided for the same as long as they were "personal views".

Khobragade, former Deputy Consul General of India in New York, was arrested in the US on charges of making false declarations in a visa application for her maid and released on a USD 250,000 bond.

The issue had escalated into a full-blown diplomatic spat between the US and India, which retaliated by downgrading privileges of certain category of US diplomats among other steps.

Meanwhile, her father also defended her talking to media.

"Her right to speak is guaranteed under the Constitution," former IAS officer Uttam Khobragade told a TV channel.

"I have full faith in the government. This is a welfare state and I am sure it will take every step to safeguard the dignity and right of the citizen.

Asked if he wants PM Narendra Modi to bring up Devyani's case when US president Barack Obama visits India next month, Khobragade said, "Definitely. If we don't look to our Head of the State, (then to) whom will (we) look to for giving justice."