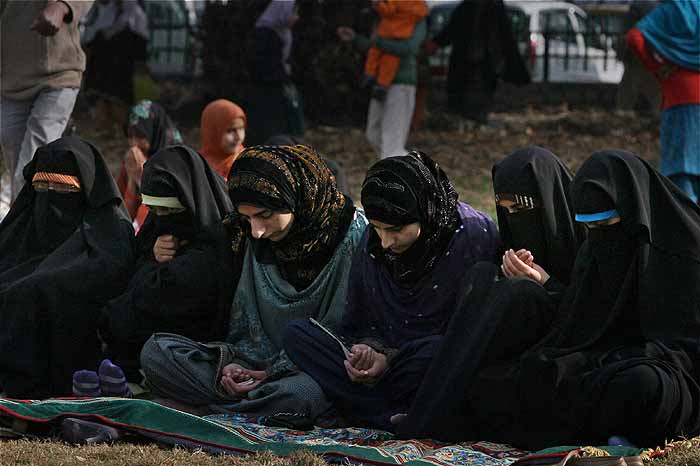 Jamaat-e-Islami Hind (JIH), one of the prominent Muslim organisations, has come out strongly against the government's stand on triple talaq, insisting that there should be no interference "in the belief and religion of any citizen".

In a statement, JIH chief Maulana Syed Jalaluddin Umari said Muslims consider divorce, polygamy and other personal laws as "an intrinsic part of their religion and are hence obliged to follow the Sharia in those matters".

"The government should respect this position of Muslims, instead of conspiring to put an end to it," he said.

Maintaining that attempts to "impose" a common civil code in the name of social reform and gender justice will prove "counterproductive", he said, "The Constitution guarantees the freedom to profess, practice and propagate one's own religion."

"This inviolable freedom is given to every individual and enshrined as a fundamental right in our Constitution."

The Centre had last week opposed the practice of triple talaq in the Supreme Court, maintaining that it cannot be regarded as an essential part of religion.

"Gender equality and dignity of women are non-negotiable," the government had told the Apex Court in an affidavit in which it also held that "religious practices cannot be an impediment to rights and aspirations of individual woman irrespective of the religion she practices."

Stressing that the government cannot force Muslims to follow other communities in issues related to personal laws, the Jamaat chief said it would amount to "infringement" on their fundamental rights.

"Those clamouring against triple talaq and demanding a ban on polygamy are a minuscule minority and are not representative of the Indian Muslim community," he said, adding the government should respect this position of Muslims instead of "conspiring" to put an end to it.

"Jamaat-e-Islami Hind completely stands by the All India Muslim Personal Law Board which is the authentic representative body of Indian Muslims," he said, adding all "major" Muslim organisations and a "vast majority" of the Muslim community stand solidly behind the Board and "will not accept any interference in their personal law."

Asserting that those who are trying to "sow the seeds of dissension among Muslims will never succeed", the Jamaat chief said, "The problem of triple talaq and polygamy has been blown out of proportion with the sole motive of portraying Muslims as being patriarchal and misogynistic."

He claimed that the percentage of polygamy amongst Muslims is "negligible".

"It is not mandatory for Muslims to practise polygamy but permission to have more than one wife does exist, albeit under certain conditions," he said.

"The ideal way of divorcing one's wife is to pronounce talaqs one by one over a period of three months between her menstrual cycles, so that there is an opportunity for reconciliation between the spouses," he said.

Besides, he said, a little known fact is that Islam allows a woman to get divorce through a process called "khula". "If she is not happy with her marital life, she may return her alimony and demand separation. If the husband does not comply with her request, she may approach a 'qazi' (judge) who will help her to complete the divorce formalities," he said.

Amid a raging debate on uniform civil code, the Law Commission has sought public views on the subject to revise and reform family laws, saying the aim is to address social injustice rather than plurality of laws.