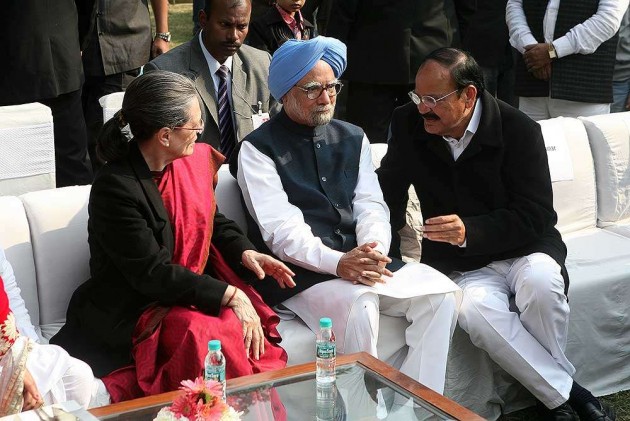 Facing stalemate over GST bill, Government today reached out to Congress again with Union Minister M Venkaiah Naidu calling on party chief Sonia Gandhi seeking her support for its passage and expressing willingess to advance Parliament's Budget Session in this regard.

This is the second major outreach of the government to the top Congress leadership on the GST bill after Prime Minister Narendra Modi had met Sonia and his predecessor Manmohan Singh over tea at his 7 RCR residence on November 27.

The second round of meeting between the government and the Congress top leadership appeared to indicate that some middle ground is being worked out for the passage of the crucial GST bill.

Sources said the government is enthused with unequivocal support announced by a number of regional parties to the GST bill and is toying with the idea of convening the Budget Session earlier than its normal schedule in third week of February but would like Congress to be on board on this decision.

After a 20-minute long meeting with Gandhi at her residence, Naidu told reporters that he met Gandhi in his capacity as the Parliamentary Affairs Minister and that he asked the Congress President to take a final stand on the two pending bills relating to GST and real estate.

"We had invited Sonia Gandhi and former Prime Minister Manmohan Singh and discussed with them the GST and other bills. In the same context, I as Parliamentary Affairs Minister of the government today met the Congress President and recalled to her that as per the discussion held earlier, Congress party should finalize its stand. They had raised some issues, which were answered by Finance Minister Arun Jaitley.

"Since the government has already spoken to Leader of Opposition in Rajya Sabha Ghulam Nabi Azad and Congress' Deputy Leader in the House Anand Sharma in this regard, I reminded her that a quick decision should be taken and we should move forward immediately on the GST and the Real Estate Bill," Naidu told reporters after the meeting.

Naidu said that Gandhi told him that she will discuss the issue within her party and get back to to the government.

"I said if you take a positive decision, we can also call the Budget Session early. I merely gave an indication for it. I have not made any committment (regarding the early session)," the Minister said.

Earlier when the GST bill did not see the green light in the Winter Session, Naidu had said he was ready to call on Sonia or Rahul Gandhi along with Finance Minister Arun Jaitely if that could ensure the passage of the GST bill.