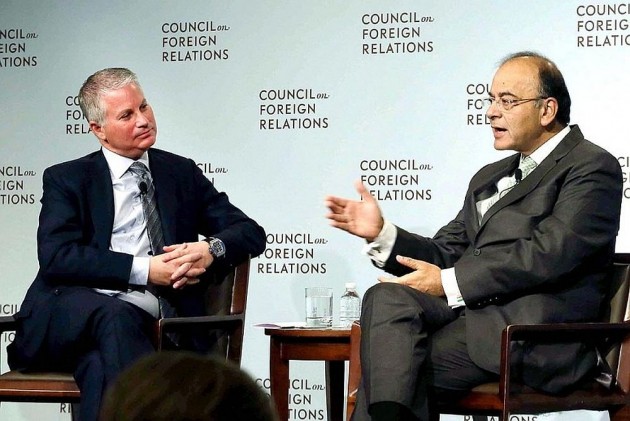 Finance Minister Arun Jaitley has asserted that the government was giving top priority to addressing the issue of bad loans while acknowledging that the problem of non-performing assets was "adversely impacting" the Indian banking system.

Speaking at the Council on Foreign Relations here, Jaitley termed the resolution of the Non-Performing Assets (NPAs) as the "one very big challenge" going forward and the government's "top priority" at the moment.

He said the magnitude of the NPAs problem was that essentially it was about 20 to 30 big accounts.

"It's not a problem spread over hundreds of thousands of accounts...And it's not impossible for a large economy like India to resolve 20 to 30 accounts. So it's not an insurmountable problem. I think it's just persisted too long, but it's certainly adversely impacting us," he said.

"So if you were to ask me, there are a series of reforms/changes which we've successfully made. This is one hurdle which we are now required to jump, and that's where our current focus is," he said yesterday.

However, Jaitley said there was one constraint the government was facing.

"It's not a constraint on the leadership quality in the bank, but it's a constraint on the environment in which the bank bureaucracy functions. I have seen that the banks are not bold enough to take their decisions because...Our anti- corruption law is still a pre-liberalisation law," he said.

Jaitley emphasised that one of the fundamental flaws in the anti-corruption law has been that erroneous decision- making, which may be taking hair cuts in order to settle, gets identified as an act of corruption.

The parliamentary committee has unanimously recommended that this be corrected, he said.

"And this is at the final stage now. The recommendation of a larger consensus parliamentary committee has come. Hopefully, in the next session we will take this up," he said.

"The bank bureaucracy is going to be -- or, for that matter, any bureaucracy or a public servant dealing with economic decisions, then they can decide on commercial considerations rather than be constrained as to the future consequences of their action itself," Jaitley said.

"So the decision between a possible commercial decision being treated as an act of corruption, I think that the law has to eliminate that possibility," he said.

The Reserve Bank of India has come out with several guidelines and schemes under which the banks have been empowered, Jaitley said.

Outlining these schemes, Jaitley said there was an insolvency law in place and there was another action which the government has in the pipeline in order to resolve this.

"Essentially, it would also mean that the defaulting companies will have to find partners, will have to go in for either change of managements, they'll have to get investors. And some precipitative action will be taken. This may also involve some hair cuts by the banks, which would be a bona fide commercial consideration," Jailtey said.

He noted that Indian banks, particularly public sector banks, have conventionally lent for both infrastructure and industry, rather than just retail lending.

"Now, during the boom period and thereafter, there was lending in several sectors. And because of the global downturn and those sectors being impacted, you found an adverse impact on some of those sectors," he said.

Further, he stressed that as a combined impact of the GST, demonetisation and several other steps, the government has taken, revenues in India are increasing quite rapidly.

"In fact, in the last three years, despite global slowdown, India has consistently seen 15 to 18 per cent annual revenue growth, which is quite significant.

"And therefore, I do see over the next several years this revenue growth, particularly as the result of GST and the anti-evasion measures we've been taking, rapidly increasing," he said.