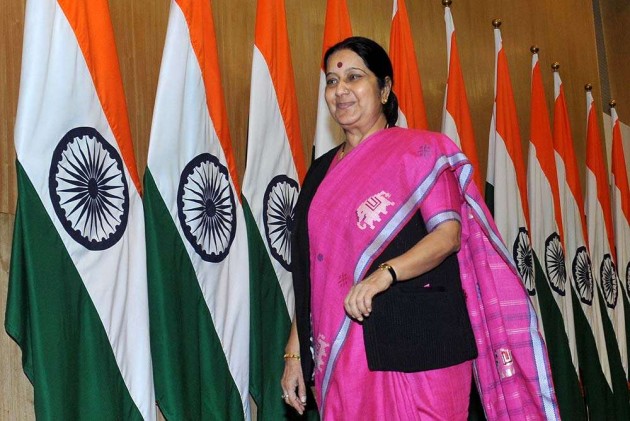 The government is considering giving Aadhaar cards to Non-Resident Indians and a decision on it will be taken soon, External Affairs Minister Sushma Swaraj said today while inviting the diaspora community to actively participate in India's growth story.

In her address to the first limited edition of Pravasi Bhartiya Divas, Swaraj said it has been decided that women workers will be allowed to go to Gulf countries for employment only through government agencies to ensure they are not duped by recruiting agents or firms.

The PBD, webcast by almost all Indian Missions and Posts, was organised for the first time by External Affairs Ministry (MEA) after the government's decision to merge Ministry of Overseas Indian Affairs (MOIA) with it.

Earlier MOIA used to host the event. January 9 was chosen as the day for PBD as it was on this day in 1915 that Mahatma Gandhi, the "greatest Pravasi", returned home from South Africa to lead India's freedom struggle.

"So far Aadhar card has been given to those Indians who live in India. It is not for non-resident Indians. But you will be happy to know that the Prime Minister wants the card to be given to the NRIs the way it is issued to people living in India.

"He even wants it for OCI (Overseas Citizens of India card) holders. The matter is under our consideration. No decision has been taken as discussions on it are underway. I hope soon you will hear about it," Swaraj said during an interaction following her address.

The government has so far issued Aadhaar cards to over 92 crore citizens. Under the programme, every citizen is to be provided with a 12-digit unique identification number for which biometric information is collected.

On restricting women from going to Gulf countries through the recruiting agencies, she said the decision has been taken to stop them from getting duped.

"We will send women only through government agencies," Swaraj said during an interactive session with Indian missions abroad.

Calling upon the diaspora to be part of the India growth story, she said "It is time for you to come back to India."

Effusive in praise of the Prime Minister, Swaraj said India's engagement with the overseas Indians has increased manifold because of his constant endevour to reach out to the community. Swaraj also mentioned Modi's Madison Square address in the US and at the Wembly in London.

"Your achievements in the countries of your adoption are a matter of pride... It is our responsibility to protect you and take care of you. Indeed, we are you and you are us," she said.

The External Affairs Minister also appealed to the diaspora to pay heed to government's advisories issued considering possible deterioration of situation in any country.

"I am requesting you with folded hands, please heed to our advisories. We have to put so much effort to rescue when the situation deteriorates. Life is more important than money. As and when advisories are issued, follow them," she said.

The External Affairs Minister also listed the number of Indians evacuated in the last 19 months from various countries including Yemen, Iraq, Libya and around 1,000 students from Ukraine after internal situation in those countries turned bad.

Listing various iniatives for the welfare of the diaspora, she said government was considering extending Overseas Citizenship to fifth and sixth generations from current cut off of fourth generation.

She said India Development Fund is also being revamped to ensure that overseas Indians can contribute towards development of their villages and schools and in other spheres in India. IDF facilitates development works by the diaspora community.

"You will be able to know about implementation of various projects online also," she said.

On merger of Overseas Indian Affairs Ministry with MEA, she said there should not be any fear in the minds of the diaspora about government's commitment to their welfare as it would continue with all the schemes being implemented by that Ministry.

"It was a very good administrative decision...There should not be any fear. We will continue all the schemes. In fact we will ensure their better implementation," said Swaraj.

On the new format of the PBD, she said the government has identified 10 subjects concering the diaspora and would deliberate on them through the year. The report will be ready before the next year's PBD.

The UK's Minister of State for Employment Preeti Patel also addressed the event and lauded Prime Minister Modi's efforts to engage with the Indian diaspora.

Last year, the government had decided to hold a larger version of Pravasi Bhartiya Divas (PBD) every two years and a limited one in the intervening year.

The 13th edition of the PBD was held in Gujarat last year.

PBD conventions are being held every year since 2003. During the event, individuals of exceptional merit are honoured with the prestigious Pravasi Bharatiya Samman Award to appreciate their role in India's growth.

The government has directed all Indian Missions to celebrate PBD in an appropriate manner.