Of the five opposition amendments, three were moved by the Congress member Digvijaya Singh and two by Sitaram Yechury of CPI(M). 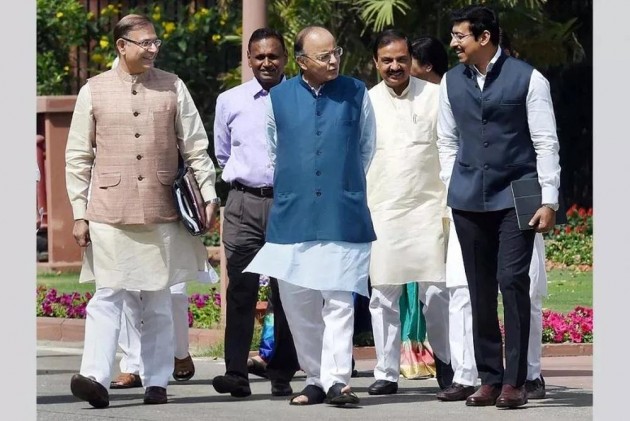 The government today faced a major embarrassment in the Rajya Sabha as five amendments moved by the opposition to the Finance Bill 2017 were adopted before the House approved the measure.

Of the five opposition amendments, three were moved by the Congress member Digvijaya Singh and two by Sitaram Yechury of CPI(M).

The amendments were adopted with a significant margin, with the difference of votes ranging between 27 and 34 votes.

Trinamool Congress, which has 10 members, staged a walkout before the voting in the House where the ruling NDA is in a minority. In the 245-member House, the BJP has 56 members while the NDA jointly has 74 members.

Earlier, while replying to the debate, Finance Minister Arun Jaitley strongly defended the government's endeavour to make Aadhaar compulsory for access to various benefits, saying it was necessary to check frauds, including tax evasion.

While talking about Aadhaar, he admitted that it was a "great initiative" of the previous UPA government and said the NDA dispensation is expanding it.

"Earlier, some of us had doubts over Aadhaar...Some of your people (in Congress) also had doubts. Later, a presentation was made to the Prime Minister (Narendra Modi) where the doubts were cleared," Jaitley said.

Responding to repeated questions by the Congress members as to why Aadhaar was being made mandatory, he countered by asking why this technology should not be utilised since it was created for public benefit.

Congress leader P Chidamabaram asked whether the government could give guarantee that the Aadhaar details would not be leaked through hacking.

To this, the Finance Minister said while hacking could not be ruled out, the firewalls should be made stronger.

When referred to the leakage of Aadhaar details of cricketer M S Dhoni, Jaitley said it was the result of an "immature" act by somebody in Ranchi against whom action has been taken.

For this reason, the technology cannot be discredited, he said.