Gopichand Praises PV Sindhu For Her Performance This Year, Says She Is Capable Of Doing Better 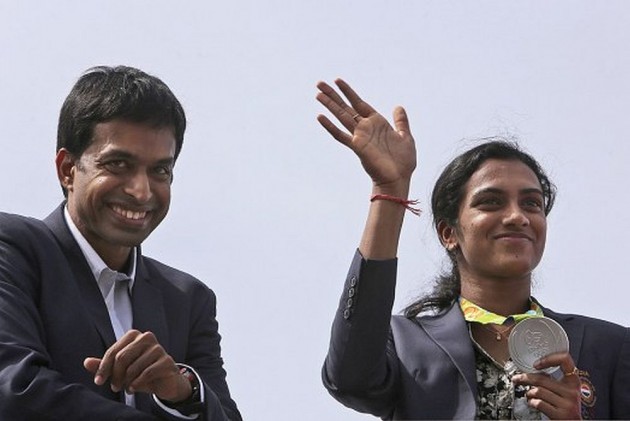 Print
A
A
A
increase text size
Outlook December 21, 2016 17:53 IST Gopichand Praises PV Sindhu For Her Performance This Year, Says She Is Capable Of Doing Better

Hailing Pusarla V Sindhu's excellent show right through 2016 that saw her becoming the first and only Indian shuttler to win a silver medal in the Olympic Games, chief national coach P Gopichand said today his lanky ward is capable of scaling greater heights.

"I have always maintained that even when she won in 2013 or 2014 (back-to-back world championship singles bronze medals) Sindhu is still some time away from being her best. I maintain that even now that she has the potential to do even better," said the former All-England men's singles champion during an interaction with the media here.

"She has done a lot of hard work to reach here and a lot of people will keep looking to get good performances against her and beat her. It's going to be challenging, but I am happy the way she has coped with the pressure and got us the performances which were very important," Gopichand said.

He was also happy with Sindhu's performance at the year-ending World Super Series Finals in Dubai where the 21- year-old reached the semi-finals before losing to South Korea's Sung Yi Hyun after avenging her defeat in the Rio Olympics final to Spain's Carolina Marin in the group stage.

"Overall it has been a very good show from Sindhu (in Dubai). She played well in all the matches. Of course she lost to Sung but Sung played very well on that day; it was a very good match.

"The year has been fantastic. She had a chance to play Marin (in Dubai) and beat her. It's good. The way she qualified for the Super Series finals was also very creditable as she had to win and play the finals. In the last three tournaments she took part in there was one win, one runner up and one semi-final. I'm happy the way she has played overall."

The national coach said the key for Sindhu to continue her progress lay in adapting to different styles of play and court conditions.

"She of course needs to adapt to different styles of play, different court conditions. She needs to actually get used to the fact that it does not matter to lose," said the 43 -year-old badminton legend.