Gopalaswami Demits, Navin Chawla to Take Over as CEC 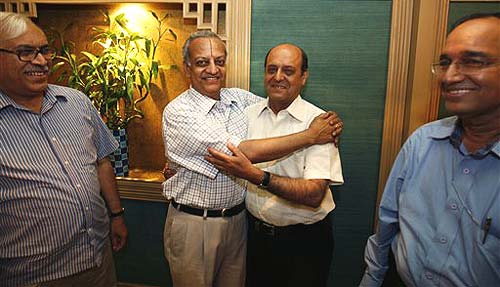 Print
A
A
A
increase text size
Outlook April 20, 2009 22:40 IST Gopalaswami Demits, Navin Chawla to Take Over as CEC

Navin Chawla will take over as the Chief Election Commissioner (CEC) on Tuesday (April 21) succeeding N Gopalaswami who not long ago had recommended his removal from Nirvachan Sadan sparking a huge political controversy. The 63-year-old Chawla, who is the senior-most Election Commissioner after Gopalaswami in the three-member panel, will remain in office till June 29 next year when he turns 65.

The outgoing CEC, who had a five-year tenure at the Commission--three of them at its helm--shook hands with Chawla embraced him as he took leave on the lawns of the Commission. Both the Commissioners gave him bouquets.

The CEC, a Constitutional post, enjoys a term of six years or till the age of 65 years, whichever is earlier.

Good While it Lasted?

The elevation of Chawla, who was appointed as Election Commissioner on May 13, 2005, comes after a controversy triggered by Gopalaswami's recommendation to the President for his removal from office for alleged partisan functioning.

Gopalaswami, who had his differences with Chawla and had recommended to the President for his removal after the Bharatiya Janata Party ( BJP) had filed a complaint with the Commission, was given a warm farewell by the two Commissioners and the staff. The recommendation was rejected by the government, which appointed Chawla as the next CEC.

Even in his last days, Gopalaswami and the other two Commissioners differed on a petition seeking disqualification of Congress President Sonia Gandhi for receiving Belgium's second highest civilian honour 'Order of Leopold'.

Acting on a petition filed by a Kerala advocate seeking her disqualification, Gopalaswami wanted further inquiry into the issue of her receiving the award but the other two Commissioners felt there was no no need for such an inquiry.

By a two-one split verdict, the Commission has rejected the demand for Gandhi's disqualification and sent it to President Pratibha Patil, who is expected to notify the EC opinion.

Differences between Chawla and Gopalaswami came to the fore during meetings to discuss the schedule for the assembly elections in Karnataka last year. While the CEC had favoured polls in the southern state to be held before the expiry of President's rule by May-end, Chawla wanted the elections to be delayed.

He is the first CEC who will take over in the midst of the five-phased Lok Sabha elections and will oversee four phases of the polls.

Chawla has earlier served in various capacities in the government during his chequered career, the last being Secretary in the Ministry of Information and Broadcasting. He has also served as Secretary to the Union Public Service Commission (UPSC).

Chawla was secretary to the Lieutenant Governor of Delhi at the time of Emergency. He has authored a number of books, including an authorised biography of Mother Teresa which became popular internationally.

Chawla is also a recipient of the Italian government's Mazzini Award, instituted in honour of writer Giuseppe Mazzini, for his contribution to promote ties between India and Italy.

Prior to this appointment in the Election Commission, he was the Union Home Secretary and had earlier held the posts of Secretary in the Department of Culture and Secretary General in the National Human Rights Commission.

A gold medallist post-graduate in chemistry from the Delhi University, he served in the Gujarat Government in various capacities for 25 years.