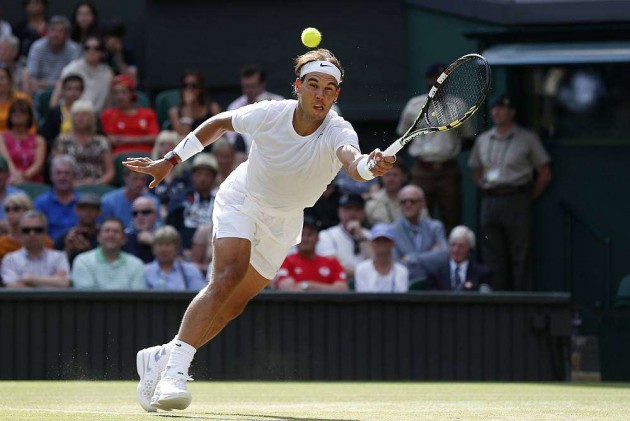 Rafael Nadal insisted he has no intentions of quitting tennis despite slumping to a fourth successive Wimbledon humiliation.

Brown, who once was so short of cash that he travelled to tournaments in a camper van, hit 13 aces and 58 winners on the back of a free-hitting, serve-and-volley barrage.

It was 29-year-old Nadal's first ever defeat to a qualifier at a Grand Slam and came in the aftermath of losing his French Open crown where he had been champion nine times.

Thursday's loss followed his 2012 second round exit to world 100 Lukas Rosol, a first round beating by the 135-ranked Steve Darcis in 2013 and last year's fourth round defeat to Nick Kyrgios, who was at 144.

But the 14-time Grand Slam winner and former world number one vowed to fight on in an effort to restore his reputation as the sport's most feared competitor.

"So I lost. Sad today for that, obviously," said Nadal, who came into the tournament ranked at 10, his lowest in a decade.

"But that's sport. Good moments, bad moments. Obviously today is a bad moment for me. I just need to accept these kind of things can happen. I did that all my career.

"I will keep going. It's not the end. Life continues and my career, too. I have to keep going and working more than ever to try to change that dynamic."

This year, Nadal has looked a shadow of the player he once was.

He missed the defence of his US Open title in 2014 due to a wrist injury and then underwent an appendectomy, shutting down most of the second half of the year.

He lost at the French Open for only the second time in his career last month, knocked out in the quarter-finals by Novak Djokovic after arriving in Paris having failed for the first time to have won a European clay-court title.

Nadal bounced back with the Stuttgart grass-court crown but that was followed by a meek, first round exit to Alexander Dolgopolov at Queen's.

He's been at a career crossroads before -- his defeat by Darcis at Wimbledon in 2013 was followed just three months later by his second US Open title.

Despite that evidence, Nadal knows that a third Wimbledon crown may be beyond him especially with the grass courts proving the most demanding of all the surfaces on his troublesome knees.

Nadal says that come what may, he will always be proud of his Wimbledon record.

"My motivation is try to be back to that level. I am going to keep working on that. If I don't make that happen, well I played five times here, had the trophy back home two times, so is not bad."

"I am a good loser. When I am not that good, I always accept. I never considered myself that good to not accept when somebody's better than me."

Nadal, widely-respected for his humility and graciousness on tour, still found time for humour despite his dark mood.

When asked if he intended to stay in London, he replied: "I don't have more work here in London, so if you want to use the house, it's going to be free tomorrow.