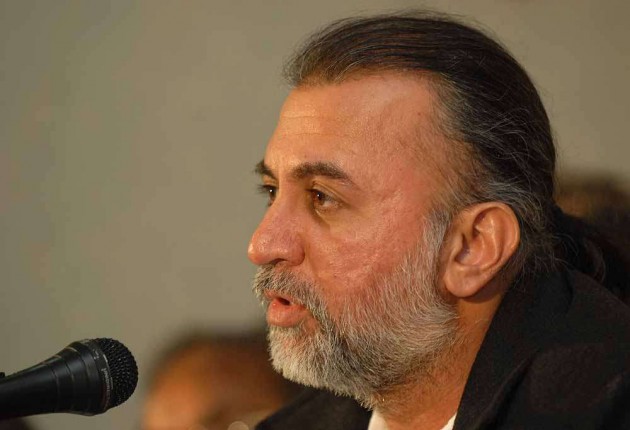 Moving towards an imminent arrest, the Goa police today approached a local court for issuing a non-bailable warrant against Tarun Tejpal, who is accused of sexual assault against a woman journalist colleague, after he failed to appear before police.

Court order on NBW is likely on November 29.

Tejpal has now told Goa police that he will appear before them tomorrow in the investigations, his lawyer Sandeep Kapur, said in Delhi in the evening.

"We have sent a fax to the Goa police and have informed them that Tarun Tejpal will join the investigation tomorrow," his counsel Sandeep Kapur said.

Earlier, Goa police had rejected Tarun Tejpal's request for time till Saturday to appear before it.

Without specifically saying whether a non-bailable warrant has been issued against Tejpal, DIG O P Mishra said "whatever logical and legal step as empowered by law has already been initiated".

"Keeping in view the seriousness of the offence, the Investigating Officer (IO) has not accepted his (Tejpal's) request (for more time) to appear before her," he said.

"The IO is now proceeding in the case as per law. All other formalities will follow. We will do them without any loss of time," he said without disclosing what the step was.

Asked whether a non-bailable warrant of arrest was being issued or whether he would be arrested, Mishra said, "it has serious implications and as per law empowered, we are proceeding without any further delay".

To a question again whether NBW will be issued, Mishra said that is the logical and legal step.

Mishra said the notice asking Tejpal to appear before the IO by 3 PM today was duly served and was received by the family. But around 12 noon today, a lawyer for Tejpal served a letter to the crime branch police seeking an extension of time for appearance by Saturday since he was not in Goa.

To all questions on the next strategy including whether Tejpal would be arrested, he said "I would not divulge what steps we are taking. It has serious implications. As per law empowered, we are proceeding without any further delay."

He said when the deadline of 3 PM was for Tejpal's appearance today the police took into account the journey time from Delhi to Panaji.

Mishra said the IO took into account all the factors before deciding on not accepting Tejpal's request for extension of time.

"Keeping the seriousness of the offence in view, the IO has rejected it (request for extension of time). Without any further delay, the IO is proceeding as per what the law empowers," he said.

Asked whether the Goa police was proceeding to effect an arrest, Mishra indicated such a course.

"There should be no doubt that the next logical step is that. The IO is proceeding as per logical and legal protocol," he said.

A copy of the letter, addressed to Sunita Sawant, police inspector CID/CB PS Dona Paula, Goa, was made available to the media in which Tejpal described the sequence of receiving the summons issued to him by police and said he "requires a little time" to appear before it as he is not a resident of Goa.

"Since I am not a resident of Goa, I require a little time to appear before you. I request you to kindly allow me to present myself for investigations on Saturday afternoon - that is, day after," he said in his letter.

In a change of strategy, Tejpal withdrew his bail plea in the Delhi High Court, saying he will "approach appropriate court for appropriate remedy".

A day before the High Court was to pass order on his bail plea, Tejpal counsel made the plea which was allowed by Justice Sunita Gupta who had yesterday reserved her order in the matter.

"We told the judge that we are withdrawing it with a liberty to approach appropriate court for appropriate remedy which also includes anticipatory bail and the court allowed our plea," advocate Sandeep Kapur, appearing for Tejpal, said.

Tejpal had stepped down as Tehelka Editor-in-Chief for six months in the wake of the sexual assault case against him.

Fearing arrest by Goa police in connection with the case, Tejpal had approached the High Court seeking either anticipatory or transit bail.

Amidst speculation that Tejpal might approach the Supreme Court, his wife, daughter and some close friends were seen in the apex court in the morning along with his counsel Geeta Luthra and Kapur.

Kapur, however, said that Tejpal is not planning to move the apex court in the matter.

Tejpal had yesterday failed to get any immediate relief on his anticipatory bail petition in the Delhi High Court.

The Goa police direction to him yesterday came after the victim, who has alleged that she was sexually assaulted by him in a lift in a five-star hotel in Goa earlier this month, recorded her statement under Section 164 of CrPC before a magistrate in Panaji.

The controversy also saw resignation of Shoma Chaudhury as Managing Editor of Tehelka, who is being accused of covering up the matter.

Chaudhury sent her resignation early this morning as there was speculation that she may also be named in the FIR for certain alleged acts of commission and omission after the scandal became public.

Yesterday, Tejpal's counsel had sought in the high court that till November 29, when the court was to pronounce order, the editor should not be arrested in the case.

Tejpal alleged that the case has been foisted on him at the behest of BJP which was targeting him for having several years back caught the then BJP president in a sting operation accepting money.

The judge, however, had declined the oral plea for an order that he should not be arrested for the next two days.

The Goa police counsel had refuted Tejpal's submissions, saying "this is a man married with a family and was dealing with an employee who is a friend of his daughter and whom he knew from her childhood. This offence shows the depravity of highest order by a man who is having control over the victim.

"...The man acts like a predator and treats the incident as a drunken banter. He is treating a woman like an object because he is in a position of dominance. There is no question of consent. It has happened to a hapless woman. It is not a case for any indulgence by the court."

Tejpal's counsel had referred to the contents of the FIR alleging the girl has used words like "attempted" and "tried" in relation to the alleged offences and hence, they did not make out a case of rape as alleged by Goa Police.

The Goa police has registered the FIR against Tejpal for allegedly sexually assaulting his junior on November 7 and 8 in a lift in a five-star hotel in Panaji.