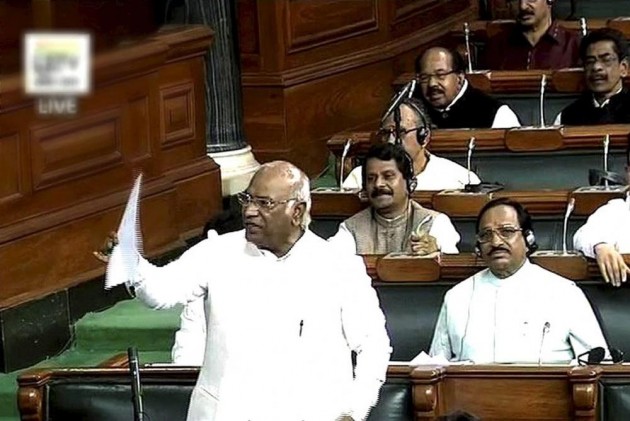 The issue of government formation in Goa and Manipur is set to rock the Lok Sabha with the Congress deciding to move an adjournment motion today.

Sources said that the leader of Congress in the lower house, Mallikarjun Kharge, along with some other party MPs, will move the motion while seeking to raise the issue and demand a discussion on it.

The Congress has alleged that the BJP is moving against the law and precedent in forming their governments in Goa and Manipur, saying they are the single largest party in both states.

In Goa, the Congress has 17 legislators followed by BJP with 13, Goa Forward Party and MGP with three each, three independents and NCP (one).

The party has won 28 seats in Manipur while the BJP has secured 21. The NPP and the NPF have won four seats each, with the LJP and the Trinamool Congress bagging one seat each.

The BJP leadership with their MLAs had met the Manipur governor along with the NPP president, the four MLAS of his party and the lone LJP and TMC MLAs, besides one from the Congress.

The saffron party has claimed it enjoyed the support of 32 MLAs in the 60-member Manipur assembly.

Peeved with the BJP, many Congress leaders have said that the single largest party should have been invited by the governors of both states to form the government.