Give It Up: PM Asks Well-Offs to Forgo LPG Subsidy 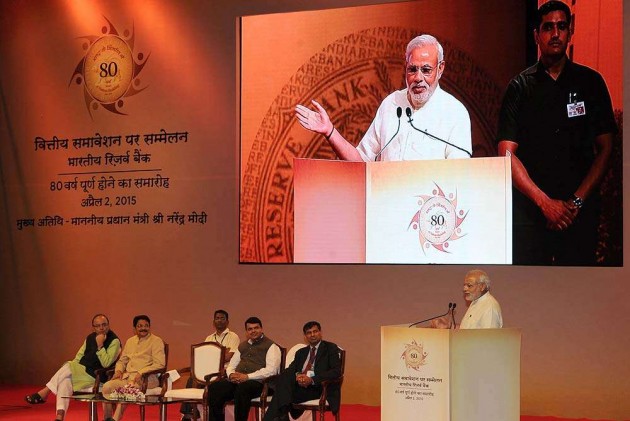 Prime Minister Narendra Modi today coined a new slogan - "give it up" - to exhort the better off sections of society to forego their LPG subsidy that can be utilised in providing subsidised LPG connections to the poor.

"Give it up" campaign should be taken up on the lines of "Swacch Bharat" and "Beti Bachao, Beti Padhao initiatives, Modi said adding, "I appeal to all MPs, MLAs, ministers, IAS and IPS officers, professors and professionals to forgo their LPG subsidy and derive happiness by doing so."

He, however, refrained from making any reference to the controversial land acquisition bill over which the Opposition is on the warpath against the government.

In his nearly hour-long address, Modi assured the people that his government would fulfil all the promises made on bringing back the black money stashed abroad.

He cited the measures taken so far including a bill with stringent provisions against those concealing their money held overseas.

Modi said his government was making all efforts to provide strength to farmers and safeguard their interests to help make them prosperous. "Farmers need technology in agriculture sector. They need infrastructure. They need electricity and water. We want to strengthen the agriculture sector and our plan is to help provide water to farmers and also protect their land."

Modi said some farmers were even forced to sell their land to pay bribe so that their sons could "become a peon or driver" and that his government wants to change the situation.

Taking on the Opposition which is questioning his promise on black money, Modi said the steps taken by his government had "shut" their mouths.

"They (Opposition) would ask where is black money? When is it coming? They would make a hue and cry to suppress the truth....The SIT constituted by our government is giving its report to the Supreme Court where the legal process is on.

"G-20 has also accepted India's proposal on black money. Now a bill has been tabled in Parliament to prevent hoarding of black money. You may have noticed that people who were ridiculing us are keeping mum now. The bill has shut their mouth."

Speaking further, he said, "The money which has gone will be brought back and we are ensuring that more money does not flow out of the country. I want to assure you that all the promises made by us will be fulfilled."

Modi also spoke of toning up administration through mobile governance that will help bring transparency.

Noting that the government has earned huge amount of revenue by auction of coal blocks and spectrum, he said, it showed the bonafide attitude of his administration, while referring to scams in both the sectors during UPA rule.