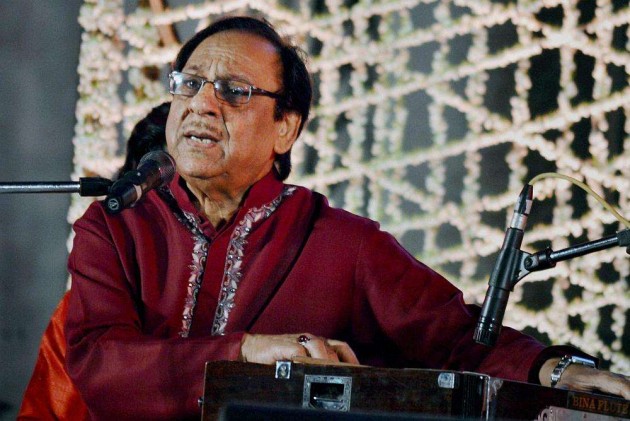 Pakistani ghazal singer Ghulam Ali's concert in the city on Friday was today cancelled after Shiv Sena threatened to disrupt it, warning that no artiste from that country will be allowed to perform in the city till terror emanating from across the border is stopped.

Organisers of the event announced the cancellation after a meeting with Shiv Sena president Uddhav Thackeray this evening at 'Matoshree', the Thackeray residence in suburban Bandra.

The decision was taken despite a snub to Sena by Maharashtra Chief Minister Devendra Fadnavis who said adequate protection would be provided to Ali and that the concert, organised in memory of late ghazal singer Jagjit Singh, would be held according to schedule.

"Ghulam Ali's programme has been cancelled. Neither Ghulam Ali nor any Pakistani artiste will be performing at the October 9 event," organiser Randhir Roy told reporters outside the Matoshree.

A source close to Uddhav Thackeray told PTI that the Sena president asked the organisers to refrain from having any Pakistani artiste perform at such programmes.

Reacting to the development, Ali said the concert was not cancelled from his end. "Atmosphere is not conducive for me to perform," he said, adding, he wants Indo-Pak ties to improve.

He further said that whenever his fans call him with love, he goes and performs.

"Such controversies spoil people's 'sur' (note). I am not angry, I am hurt. In love, such things don't happen."

Describing Jagjit Singh as his "good brother", Ali said wherever they met and performed, "we were one".

Justifying the cancellation, Roy said, "Since the situation on the border is not conducive, it is not correct to call and promote any Pakistani singer".

Shiv Sena said, "Ceasefire violations are taking place unabated and yesterday also four jawans were killed in firing by Pakistan which is continuing to sponsor terrorism in this country."

"We do encourage artistes to visit both sides and perform. As far as Pakistan is concerned, our policy is very constructive, very positive. When Indian artistes go to Pakistan, they do not come across such opposition," he said in Delhi.

Earlier Fadnavis told PTI that his government would give full protection to Ali.

"He should not be dragged into any unnecessary controversies," he said.

Before that, Minister of State for Home Ranjeet Patil said action will be taken against anybody who tries to take law into his or her own hands. "The organisers or the management of Shanmukhananda Hall (the venue) have not lodged complaint...Once they do, action will be taken," he said.

In New Delhi, Union Minister Mukhtar Abbas Naqvi voiced disagreement with Sena, saying, "This is not justified. Ghulam Ali is a messenger of peace. Such messengers of peace should not face restrictions of boundaries."

Earlier, in a letter to the management of Shanmukhananda Hall, Shiv Sena's cine wing Chitrapat Sena had said it would have to face the "anger of Shiv Sena and the patriotic people" if it invited any Pakistani artist.

Chitrapat Sena office-bearer Mangesh Satamkar said in the letter that Shiv Sena's stand had been that until Pakistan stopped terror activities, there should be no cultural, sporting and political relations with it.

Maharashtra Congress late this evening hit out at Shiv Sena, saying the party was indulging in petty politics because it had been marginalised in the government.

Congress spokesperson Sachin Sawant said Sena had no other work than criticising the Centre and the state government, of which it is a part, through its mouthpiece 'Saamana'.

"Sena's word does not carry weightage (in government) and this is why they are resorting to such petty politics. The issues between India and Pakistan have to be resolved by the Centre....Art, culture and sports should not be brought into this," the Congress leader added.

Secretary of Chitrapat Sena Akshay Bardapurkar justified the opposition to the concert, saying the victims of 26/11 terror attack in Mumbai haven't got justice yet.

"Our opposition is not to Ghulam Ali specifically but to all the Pakistani artists who gain commercially, while widows of Indian jawans killed on the border mourn for their loss," TV actor Adesh Bandekar, who is also an office-bearer of Chitrapat Sena, said.

In April, Pakistani singer Atif Aslam's concert in Hadapsar near Pune was cancelled after a strong opposition from Shiv Sena.