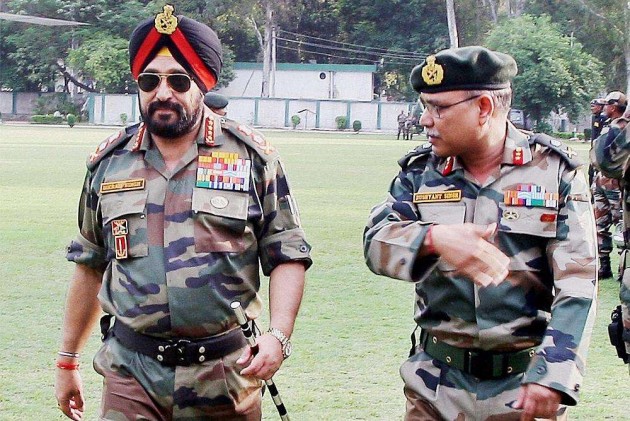 The urgent need to upgrade infrastructure in areas bordering Pakistan and China was also flagged by the Army Chief in his first substantial presentation, that lasted for about three hours, to the new Prime Minister.

Army spokesperson termed the briefing "broad-based" in which all major security issues and challenges were touched upon by Gen Singh.

"It was a detailed review of the security situation, including the internal security situation in North (Jammu and Kashmir) and the Northeast. The status of operational readiness was also discussed besides the future challenges," he said.

The issue of ceasefire violations on the LoC is also understood to have figured in the briefing, which significantly took place on a day when Pakistan shelled Indian positions in Poonch sector of Jammu and Kashmir.

Army sources, however, said Gen Singh's briefing to the Prime Minister was not because of today's ceasefire violation. It was scheduled for an earlier date but was rescheduled for today because of the death of Cabinet Minister Gopinath Munde.

The Army Chief pressed on the need to develop quality roads and other infrastructure in the border states and "deficiencies" facing it also came up in the briefing.

Official sources said Gen Singh reiterated Army's opposition to removal of AFSPA from J&K, a demand pushed by the state government, saying time for it has not come yet.

In the power-point presentation, he also touched upon the insurgency in Assam and other Northeast states.

The briefing took place a day before Jaitley's visit to J&K to review the security situation.

He is scheduled to meet the top Army brass and state government functionaries tomorrow and will be visiting forward posts the day after during his two-day visit.