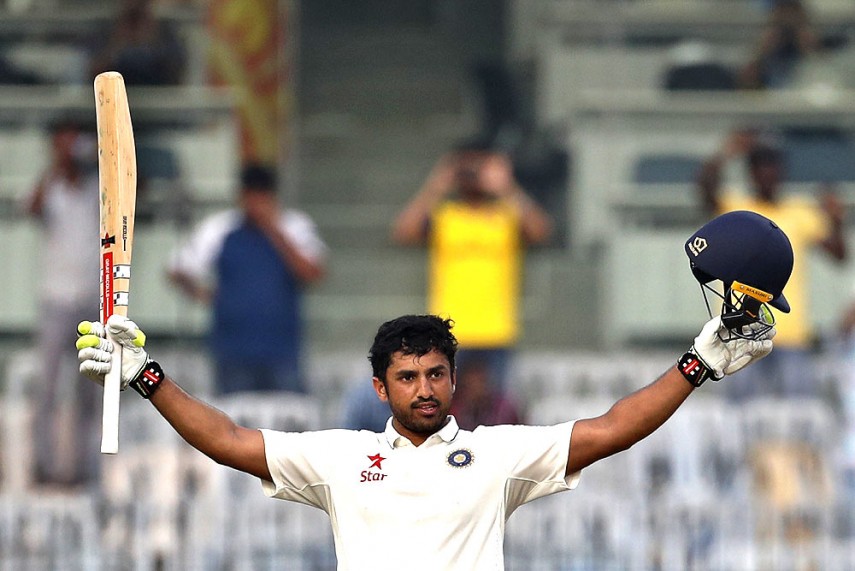 The 25-year-old Nair became only the second Indian to notch up a triple century in Test cricket after Virender Sehwag when he made 303 not out on day four of the fifth and final Test against England.

"There are two benchmarks of batsmanship for Karnataka. One is Gundappa Vishwanathan and another is Rahul Dravid. And today what we saw and yesterday with KL Rahul was a combination of the two. We saw the discipline and temperament of Rahul Dravid and the flair and the strokeplay of Gundappa. There was such a wonderful mix of Rahul and Gundappa in both the innings," Gavaskar told 'NDTV'.

"For a start it looked as if they were just going to play for a draw, it was Karun Nair when he came into bat he was the one who encouraged," Gavaskar said.

"I am so happy that he has joined that rare triple century club and many, many congratulations to him and I hope that he will carry on to get some more runs and more wins for India.

"At the same time, I want to congratulate our hockey champions as well. I think the last couple of days have been fantastic, first this Saturday Vijender wins in great style, and yesterday our juniors won the hockey World Cup. Such a tremendous times for Indian sports, and today Karun Nair gets a triple century. What a wonderful last three days for Indian sports."

Nair got to the rare landmark a day after Rahul missed out on a double ton by a run.

Asked about Rahul, Gavaskar said, "KL Rahul, in his debut Test, didn't score runs. There was just three or 4 deliveries that he shaped up against Mitchell Johnson - short, fast aimed at his head. The way he got behind the line that was an indication that temperament wise he would be somebody to reckon with. I am very happy for Indian cricket that we got these two young players who will serve India for a long time, as both of them are in their early 20s.

On Ajinkya Rahane coming back, Gavaskar said, "For a selector it is always good to have a problem of plenty. To have a situation where you know for every place you have a replacement ready in case something goes wrong. Yes it's a tough call since Rahane got runs against NZ, but you can't ignore a triple centurion. But as we know Virat Kohli is already complaining of few grey hair, let him have some more."

India broke a plethora of records en route their highest ever Test total of 759 for 7 before declaring their first innings at the fag end of the day.

"I think declaration coming at a 300 was right, at one point it was looking 250 wold be the right one. But I think it was the matter of getting to the 700, and by the time 700 mark was approaching Nair was batting so fluently that he got to 280-290.

"When someone gets that close to 3000 you have to give him that opportunity. 319 (Sehwag's best score) was not what Virat and anybody would have wanted. Look he is the only second Indian to get 300. So the fact that he got there was enough. This kind of opportunity comes once in many, many years.

"Having won the series it is only fair that Virat gave him that chance to get to 300."