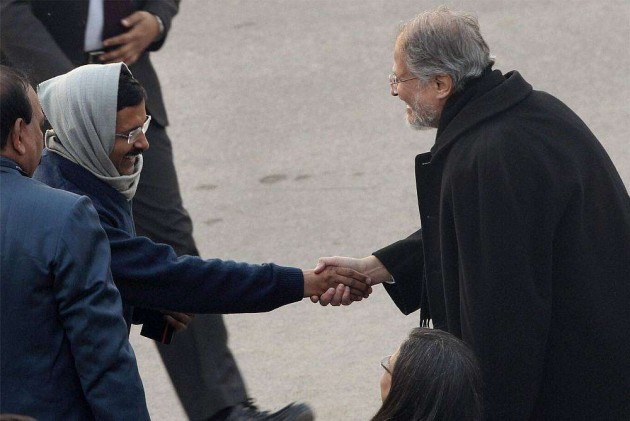 Print
A
A
A
increase text size
Outlook May 19, 2015 13:14 IST Gamlin Appointment Row: Jaising, Other Lawyers Back AAP Govt

Delhi government has sought opinion over the issue of powers of the Lt-Governor to appoint a chief secretary from eminent lawyers Rajeev Dhavan and Indira Jaising, who have supported its stand asserting that the LG has no independent discretion in the matter.

Supreme Court lawyers Rajeev Dhavan, in his letter, said that Chief Minister has a "perfect right" to a Chief Secretary of his choice and the current "crisis" has been created by the Lt Governor.

"The Chief Minister has a perfect right to a Chief Secretary of his choice. I am firmly of the opinion that this crisis has been created entirely by the LG," Dhavan wrote in his opinion to Delhi government over appointment of Shakuntala Gamlin as acting Chief Secretary by Lt Governor Najeeb Jung against the wishes of the Arvind Kejriwal dispensation.

Dhavan mentioned that "lapse of 40 hours is not sufficient reason for the LG to impose his choice on the CM especially when his urgency powers arise only when a reference is pending before the central government".

He mentioned that at best, the Lt Governor can advice the Chief Minister that it is necessary to appoint a Chief Secretary forthwith.

It is absolutely clear that the LG has exceeded his authority and has turned the entire relationship between himself and council of ministers on its head to jeopardise democracy and the Constitution, he said.

Senior advocate Indira Jaising also supported the Delhi Government observing, "There is no provision granting the LG the power to act at his own discretion in the matter of appointment of the Chief Secretary."

Explaining the appointment procedure, Jaisingh said, "The proposal to appoint the Chief Secretary must be initiated by the government in accordance with the rules of business.

Stating that the LG has no independent discretion in the matter of appointment of Chief Secretary in the democratic scheme of the Constitution, she mentioned, "The decision who to appoints the Chief Secretary must be of the Council of Ministers and it is only when the LG has a difference of opinion on that decision that his role begins, hence there is no question of the LG taking the decision who to appoint as chief secretary without waiting for the decision of the Council of Ministers."

Amid the bitter face-off, the AAP government last night directed all its officials to apprise the Chief Minister or Minister concerned about any oral or written direction from the LG or his office before following them.

In a directive, the order signed by Chief Minister Arvind Kejriwal said the bureaucrats including the Chief Secretary will have to first consult with the Chief Minister and other Ministers about any communication from the LG before acting on such directions.