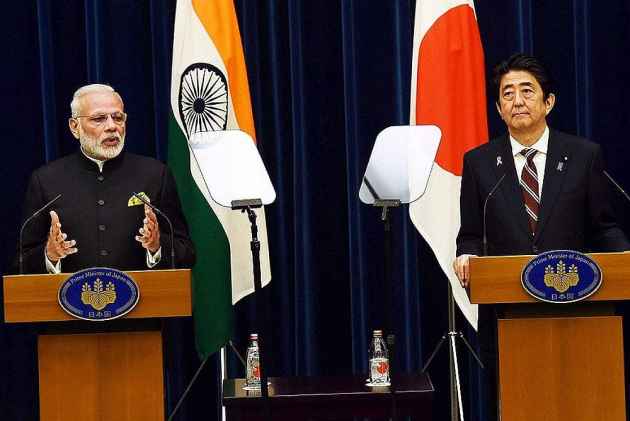 Prime Minister Narendra Modi met his Japanese counterpart Shinzo Abe on the sidelines of the G20 Summit and reviewed progress in bilateral ties as the two nations geared up for the Malabar naval exercise amid China's growing military assertiveness in the disputed South and East China seas.

The meeting between the two leaders comes months after the two nations inked a civil nuclear cooperation agreement.

"The two leaders briefly reviewed progress in bilateral relations, including in important projects, since their last meeting in Japan during Prime Minister's visit in November 2016," a statement said.

Prime Minister Modi also expressed satisfaction at developments in bilateral relations since then.

"The Prime Minister said that he looked forward to Prime Minister Abe's forthcoming visit to India for the next Annual Summit and hoped that it would further strengthen their cooperation," the statement added.

The Malabar naval exercise involving Indian, American and Japanese navies will kick start on July 10 in the Bay of Bengal.

A sizeable number of aircraft, naval ships and nuclear submarines of the navies of the three countries will be part of the annual exercise, considered a major war game in the region.

The exercise is taking place in the backdrop of a major military standoff between armies of India and China in the Sikkim section and Beijing ramping up its naval presence in the South China Sea.

There are disputes between China, Japan, and South Korea over the extent of their respective exclusive economic zones in the East China Sea.

The aim of the Malabar exercise is to achieve deeper military ties and greater interoperability among the navies of India, Japan and the US in the strategically-important Indo- Pacific region.

India and the US have regularly conducted the annual exercise since 1992.

Beijing has been suspicious about the purpose of Malabar exercises as it feels that the annual war game is an effort to contain its influence in the Indo-Pacific region.

Modi last met Abe during his visit to Japan in November 2016.