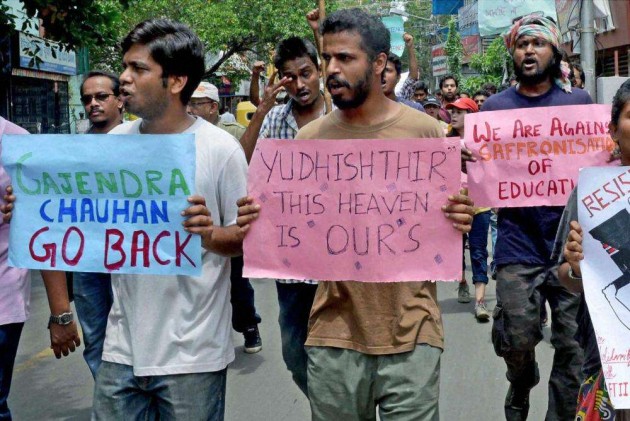 Film personalities Rajkummar Rao, Amol Palekar and Sudhir Mishra today came out in support of the demand for removal of controversial FTII chairman Gajendra Chauhan, saying he does not have the credentials to head the premier institute.

Chauhan, best known for playing Yudhisthir on mega TV epic "Mahabharata", took over as the chairman of the Pune- based institute's governing council last month and his appointment was stoutly opposed by students, who have been agitating for the almost 29 days.

Rao, a graduate from the Film and Television Institute of India, has joined the growing list of celebrities, who are throwing their weight behind the students, saying that the institute needs to be in "safe hands."

The National Award-winning actor said that the students deserve a head, who they can look up to and trust.

"#FTII needs to be in safe hands. Students need somebody who they can trust and look up to. It's their future which is at stake here," the City Lights actor posted on Twitter.

FTTI students have been on an indefinite strike since June 12 and refused to budge from their demand. They have been boycotting classes, abandoning academic work in protest against the appointment of Chauhan, who they allege lacks "stature and vision" to head the institution.

Questioning Chauhan's body of work, veteran actor-director Palekar said that he must step down from the post of chairman voluntarily as his body of work is not "inspiring for the students".

"This is something we should be talking about and by this we will clearly know that it is a mistake and that he has no credentials... If I would have been in place of Chauhan and I I would have seen that my fraternity does not want me, I would have withdrawn," Palekar, 70, said.

"Hazaaron Khwaishein Aisi" director Mishra said since Chauhan's knowledge about cinema and world cinema is limited, he is not fit to be at the helm of affairs at FTII.

"He is not in charge of the canteen. He has to guide the faculty and the students towards the new directions that the cinema may go into. There has to be a basic qualification for the job. I think it is a great institute, a wonderful place which has given a lot to the film industry.

Chauhan, who drew flak for reported criticism of Bollywood veterans Rishi Kapoor and Kher, denied having done so.

"Who are Anupam Kher and Rishi Kapoor," he was quoted as having said earlier.

"I have never said this. I cannot even think of using such words for those, who are so senior and luminaries of the film industry... With whom I have worked for so many years," Chauhan told PTI.

"Since I did not use such language to refer to the two senior artistes, why should I issue a denial."

Chauhan said the duo have their right to freedom of speech and can voice their opinions, when asked about his view on their statement that he should step down from his post.

"Both are very senior to me and big figures in the industry... Everyone has the right to freedom of speech," he said.

Actor and BJP MP Shatrughan Sinha said that the government should step in with a "middle way" to end the stalemate and protect the dignity of Chauhan.

"Shatrughan Sinha is my elder brother and what he has said are his views. But ultimately, it is the government, who has to take the final call," Chauhan said.

He, however, declined to make any comment on the lack of support for him from the film industry.

Government defended Chauhan's appointment, saying it wanted someone who could devote full time to the premier institute, in the backdrop of reports that names of Amitabh Bachchan and Rajnikanth were among those suggested for the post.

"The government wanted the Governing Council, including the chairman, to be people who could commit time for the development of the institute," Minister of State for Information and Broadcasting Rajyavardhan Singh Rathore said.

Rathore's comments came amidst reports that among the potential names suggested for the position of FTII chairman included icons like of Bachchan and Rajinikanth as well.

Significantly, names of filmmakers Gulzar, Gopalakrishnan and Shyam Benegal were also under the consideration of the I&B ministry, sources said.

A senior I&B ministry official said, "If people like Bachchan or Rajinikanth would like to run FTII, there was no objection but only those names who it was felt could devote enough time to thoroughly focus on the job were shortlisted," he said, adding another factor was the willingness to take up the job, indicating that some prominent names were not keen.