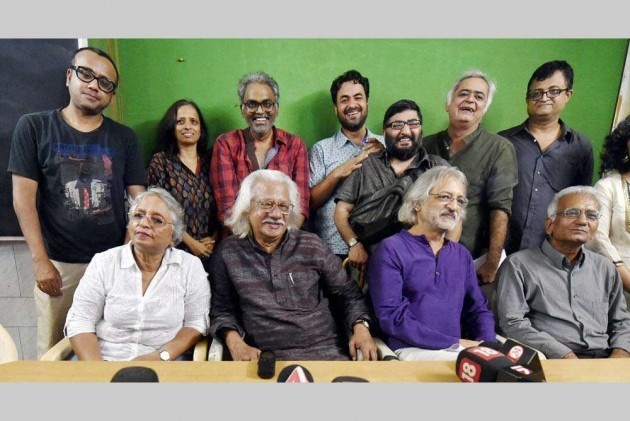 Eminent filmmakers Dibakar Banerjee, Anand Patwardhan and eight others today returned their National Awards in solidarity with the protesting FTII students and against growing intolerance in the country.

Banerjee and other filmmakers said their decision to return the awards was taken in view of the apathy displayed by the government in addressing the students issues and the general environment of intolerance against debate.

"I am not here out of anger, outrage. Those emotions have long been exhausted. I am here to draw attention. Returning my very first National Award which I received for Khosla Ka Ghosla is not easy. It was my first film and for many my most loved," Banerjee told a press conference here.

"If there is intolerance of debate, of questioning and usually intolerance of a student body wanting to have a better teaching environment and that intolerance manifests in apathy, then that is what we are protesting against," he said.

"I haven't seen so many incidents happen at the same time. This is a sign of what is beginning to happen and I think that is why people are responding all over the country in different ways," he said, referring to the instances of writers returning their Akademi awards.

"We are focusing on the FTII. This is a struggle that we are supporting from the beginning.

The FTII students today ended their 139-day-old strike to return to the classes against the appointment of Gajendra Chauhan, but said they will continue to seek his removal.

Banerjee said the decision of the students to resume classes is pragmatic as they are merely being responsible towards their colleagues and juniors.

"What do you expect the students to do? The student bodies who are protesting have got two responsibilities - one is to protest for their rights and the other is to see that their colleagues, co-students and their juniors must not suffer."

The director said that he was "against the trivialisation" of the students protests by diverting attention from the core issues.

"... What other proof do you need of their sincerity and the validity of the attitude of the students of FTII than this. Not a single bus has been burnt, not a single stone has been thrown, they have only gone for debates and discussion."

They have issued a letter to President Pranab Mukherjee and Prime Minister Narendra Modi.

"We feel compelled to return the honour the state has bestowed on us. Condoling deaths without interrogating the forces that scripted those murder revealed a tacit acceptance of the ugly force distorting our country.

"As filmmakers we stand with the students of FTII and are determined to not let them shoulder the entire burden of the protest," the letter reads.