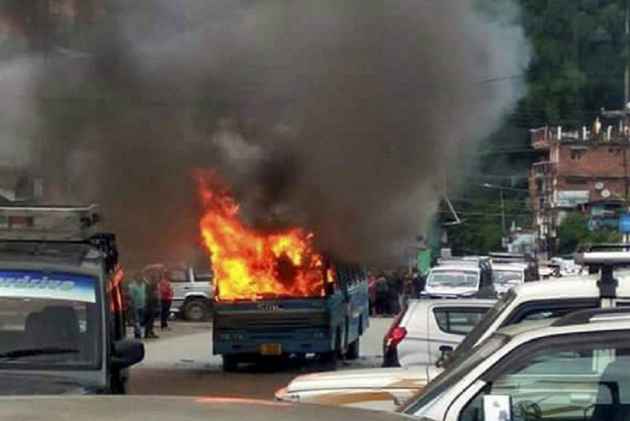 Reports of fresh violence in Mirik area of Darjeeling hills with pro-Gorkhaland supporters clashing with police and setting on fire two security vehicles and an outpost, has come to light.

The Gorkha Janmukti Morcha (GJM) alleged that its supporter Ashok Tamang was killed and another person injured in the trouble last night.

The GJM alleged that the police opened fire at pro- Gorkhaland activists in Mirik area. However, the police denied doing so.

Trouble erupted in Mirik sub-division when pro-Gorkhaland supporters pelted stones and hurled petrol bombs and glass bottles at the police, an official said.

Police sources said the protesters were baton-charged and tear gas shells were lobbed at them.

The GJM plans to take out a rally with Tamang's body in Mirik today, the 34th day of the indefinite shutdown.

A sit-in outside the district magistrate's office here to press for the demand for a separate state has also been planned.

An all-party meeting is scheduled to be held in Kalimpong today to decide on the next course of action. The meeting will be attended by all the parties of the hills.

Army troops continued to maintain a vigil in Darjeeling, Kalimpong and Sonada. Paramilitary and police personnel also patrolled the streets in the hills.

Except pharmacies, all the other shops, restaurants, hotels, schools and colleges were closed while Internet services remain suspended for the last 31 days in the hills.

With food supply severely hit due to the ongoing shutdown, GJM activists and NGOs of the hills were seen distributing food items among the people.