Fresh Storm Over Alleged Tutoring by MHA in Ishrat Case 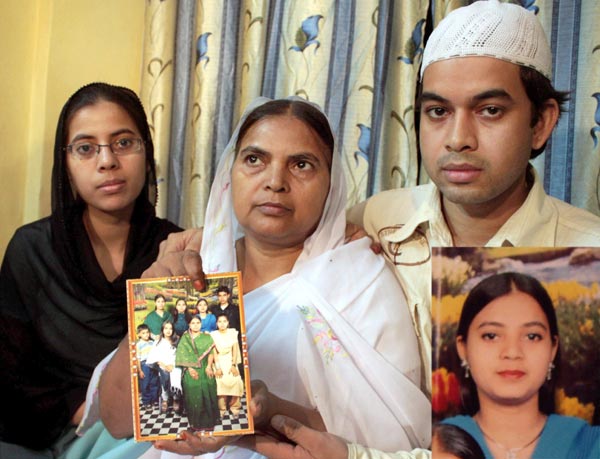 Print
A
A
A
increase text size
Outlook June 16, 2016 10:58 IST Fresh Storm Over Alleged Tutoring by MHA in Ishrat Case

A media report that the head of the inquiry into the missing Ishrat Jahan files had allegedly tutored a key witness set off a fresh storm today with Congress pushing for suo motu action by Supreme Court, accusing the Modi government of creating a "fake controversy".

Union Home Secretary Rajiv Mehrishi "hotly denied" that a senior official in his ministry allegedly tutored an officer on how to answer questions relating to missing files in Ishrat Jahan 'fake encounter' in Ahmedabad while BJP said it does not absolve former Home Minister P Chidambaram of his "role" in the change of affidavit to dilute the "fact" that she was terrorist.

B K Prasad, the Additional Secretary and the official in question, said no evidence has produced establishing that the officer identified as Ashok Kumar testified being 'tutored' during his alleged conversation. "I have conducted a free and fair enquiry which my report will reveal," he said in a statement.

Chidambaram, a senior Congress leader, accused the Modi government of creating a "fake controversy" over two affidavits filed in the Ishrat Jahan case and preparing a "doctored" report on the missing files.

In a statement, Chidambaram said the news report "comprehensively exposed the fake controversy" created by the NDA government on the two affidavits filed by the central government in the case.

"The moral of the story is that even a doctored report (of the Inquiry Officer) cannot hide the truth. The real issue is whether Ishrat Jahan and three others were killed in a genuine encounter or a fake encounter(in Ahmedabad). Only the trial of the case, pending since July 2013, will bring out the truth," he said.

The B K Prasad-led one-man inquiry committee yesterday submitted its report where it said that four of the five missing documents continue to be untraceable.

A report in a daily newspaper today alleged that Prasad not only told a witness the questions he would ask but also suggested to him what answers he should give --that he had not seen any of the missing documents.

Chidambaram said the news report completely vindicated the position that he had taken on the two affidavits in the Ishrat Jahan case.

Nineteen-year-old Ishrat Jahan and three others were killed in an alleged fake encounter on the outskirts of Ahmedabad involving the city police on June 15, 2004.

The first affidavit (August 6, 2009) disclosed the "intelligence inputs" that had been shared by the central government with the state government.

Chidambaram said Judge S P Tamang in his report (September 7, 2009) found that Ishrat Jahan and three others had been killed in a "fake encounter".

"The report caused an uproar in Gujarat and elsewhere.The first affidavit was misinterpreted and misused to defend the encounter. It was, therefore, necessary to clarify the first affidavit.

"Hence, a 'further affidavit' was filed on September 29, 2009) clarifying that intelligence inputs 'do not constitute conclusive proof and it is for the state government and the state police to act on such inputs'," he said.

Congress spokesman Anand Sharma alleged that the government was preparing a "doctored" report on the missing files in the Ishrat case.

This "fixing" was the work of the "dirty tricks department" of the government which is coordinated by the PMO, he told reporters in Delhi.

"The investigation has been 'fixed'. This was simply a show. The nation has to realise now we have a dirty tricks department coordinated by PMO," he said claiming that the whole attempt is to "deflect and divert" attention from issues before the Gujarat High Court in the case.

The BJP said the officer at the centre of the row has also issued a statement rejecting the charge of tutoring and pointed out that it was admitted by former home secretary G K Pillai that some files had gone missing.

"Unfortunately Congress feels that one of the newspapers has given them another springboard to prove that Ishrat Jahan had no LeT link. It does not absolve Chidambaram's role on changing the affidavit amd Congress' trade-off between national security and political interest," its national secretary Sidharth Singh told reporters.

"I hotly deny tutoring of witnesses. Files in the Home Ministry are never lost. They might get misplaced. But I am confident they will be located somewhere. The file (is) in Home Ministry," Mehrishi told reporters in Mumbai.

The AAP alleged that the MHA was indulging in a cover-up of the encounter amid charges of its officials tutoring witnesses in the case.

"If the investigating officers are tutoring officers and dictating question and answers to the witnesses, then why should the country not believe that the BJP too is walking the UPA's way in covering-up the matter.

"It is futile to expect impartial probe from the BJP. We hope that the judiciary ensures free and fair probe so that truth can be out and people's trust be restored," Pandey said.