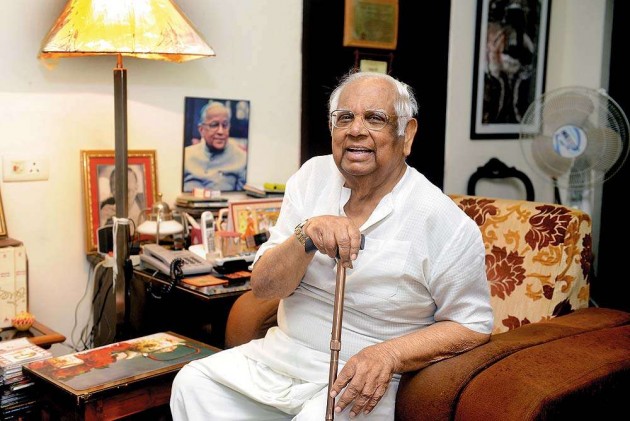 Former Lok Sabha Speaker Somnath Chatterjee today described as "very agonising" the frequent disruptions of Parliament and lamented the "inadequacy" of the position of the presiding officer who is unable to run the House because of circumstances beyond his control.

Chatterjee, during whose tenure as Speaker between 2004 and 2009 BJP was the main opposition party, recalled he too faced long periods of trouble.

"I used to be told sometimes just through a phone call half an hour before the House was to assemble for the day that it will not run on that day as our party has decided that it should not run," he told PTI in an interview.

The former Speaker regretted that the "fight" in Parliament was getting worse with no meeting point. Whoever is in the opposition is feeling he is not being heard, he said.

Referring to the current scenario when BJP has a majority on its own and the opposition is a "weakened lot", he said,"It is weakening the whole process of Parliamentary democracy. Opposition finds no way out.

"Ruling party feels why should I talk because I have majority. Ultimately, it leads to ordinances and government orders and Parliament sessions remain unproductive," he said.

"A no holds barred" fight erupts as all ways for settlement of the demands of the opposition are closed, he said, adding the evolving political culture is "very agnoising".

Such circumstances, he said, showed the "inadequacy" of the position of the Speaker "whose plight is extremely painful".

Asked what would be his advice to Speaker Sumitra Mahajan to end the deadlock, the veteran former parliamentarian said,"The Speaker does not need any advice".

Parliament's monsoon session has been a virtual washout so far with opposition Congress resolutely following the "no resignation, no discussion" line.