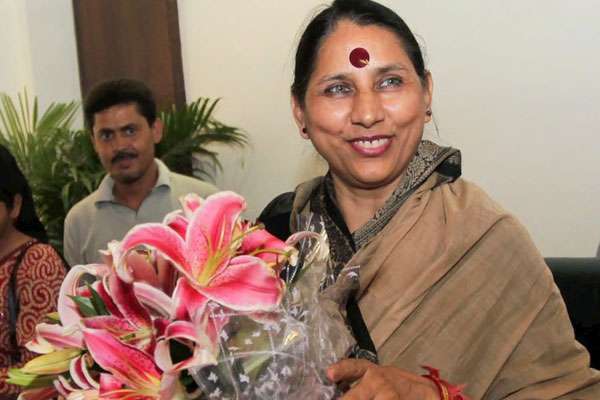 Former UPA Minister Krishna Tirath today joined the BJP, embarrassing the Congress which lashed out at the ruling party for "importing leaders in desperation" ahead of Delhi assembly election.

Tirath (59), a Congress veteran from Delhi, was welcomed in the party fold by BJP chief Amit Shah with a bouquet of flowers.

"It is a question of ideology. I met BJP President Amit Shah to serve the people.... I have come with this aim," Tirath, who was a member of the Delhi Legislative Assembly between 1984–2004 and the North West Delhi MP from 2004 till 2014, said after meeting Shah.

On what would be her role in the BJP, she said the party chief will decide that and added, "My role will be towards public service."

Congress appeared to be taken aback by Tirath's move to desert the party. Congress leader Ajay Maken said it showed the "nervousness and desperation" of BJP which is ready to bring any leader in the party fold ever since Prime Minister Narendra Modi's rally evoked a "lukewarm" response.

"They have to import leaders from other parties because they have no faith in their own leaders," he said.

Tirath is the third high profile woman to have joined the BJP in the past week ahead of February 7 Delhi assembly elections after former IPS officer Kiran Bedi and ex-AAP leader Shazia Ilmi.

BJP welcomed Tirath's move with party's national secretary Shrikant Sharma saying, "Leaders of other parties are inspired by Prime Minister Narendra Modi's agenda of development and want to see that Delhi develops as a world-class city and that is why they are joining BJP."

Tirath's joining BJP is viewed as an attempt by the party to woo dalit voters in the national capital.

Shah too had started his poll campaign by addressing a dalit rally.

Delhi has 12 reserved seats of which a majority were won by the AAP in the last assembly polls in 2013, with BJP winning only two while Congress got one.

She was earlier a member of the Delhi Assembly and a Minister in the Shiela Dikshit-led Delhi government having portfolios of Social Welfare, SC & ST and Labour & Employment.

Tirath was the North West Delhi MP since 2004 and has been Minister of State (Independent Charge) Women and Child Development in the previous UPA government.

A senior Congress leader said on the condition of anonymity that Tirath was trying hard for a ticket from the Patel Nagar constituency but was denied the ticket by party.

Congress has renominated sitting MLA Rajesh Lilothia from the seat. Tirath was not given the ticket as the rank and file in the constituency was against her, he said, adding that the party was aware of Tirath being in touch with BJP leaders but thought that it was more as a pressure tactic.

The leader said that the party had given much to Tirath in the last few decades as she was an MLA, an MP and a Minister of state with Independent charge in the UPA-II.

Suggesting that Tirath had been ungrateful to the party, he that the former Union Minister would not have taken such a decision if the Congress was not in a position to offer her some post following the denial of nomination.