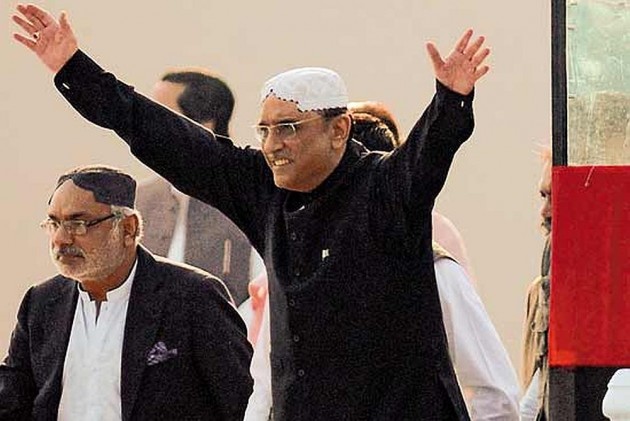 Former president of Pakistan Asif Ali Zardari has started his weekly show with a local private TV channel in which he appears as a political analyst.

Zardari's first show was aired yesterday in which he appeared live from his residence Bilawal House in Karachi and responded to questions posed by an anchor.

Zardari, 61, targeted the government for failing to appoint a full-time foreign minister.

"If the government does not have a foreign minister, then, I believe, there is no concern for Pakistan's position on the global stage and the numerous challenges the country is facing," he said.

The Sindhi word 'Khapay' in the show's name roughly translates as "live long" and is linked with a famous speech made by Zardari after his wife and former two-time premier Benazir Bhutto was killed in 2007.

The atmosphere was charged in his home province of Sindh where some of the angry workers of the party raised slogans against Pakistan, saying 'Pakistan na khappay', prompting Zardari to respond forcefully to silence them by saying 'Pakistan khappy'.

Zardari, who is co-chairperson of Pakistan People's Party, served as the 11th President of Pakistan from 2008 to 2013.

Continue FREE with Ads Pay Rs. 1 to Read Without Ads
READ MORE IN:
Asif Ali Zardari International
Next Story : Attacks on Indians in US Are Hate Crimes: Govt
Download the Outlook ​Magazines App. Six magazines, wherever you go! Play Store and App Store