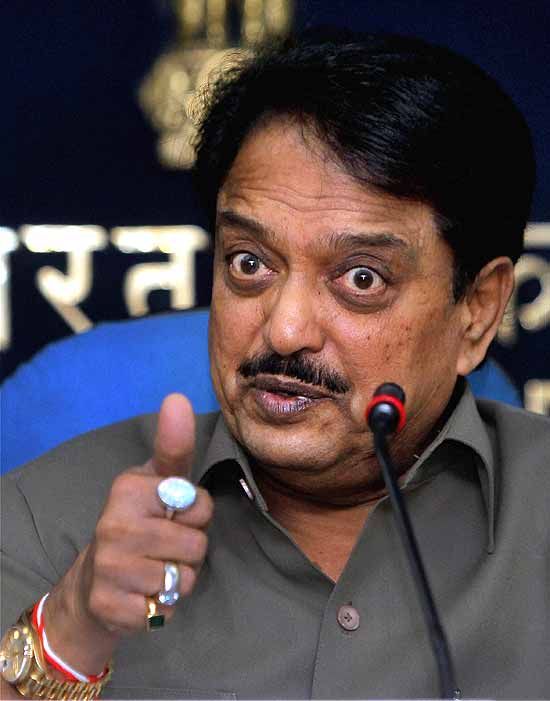 outlookindia.com
-0001-11-30T00:00:00+0553
Vilasrao Deshmukh, Union minister and Congress stalwart from Maharashtra, died in a city hospital here after plans for a liver transplant came unstuck following the demise of the donor.

67-year-old Deshmukh passed away at 1340 hours at the Global Hospital, a week after he was flown here from Mumbai in an air ambulance in a critical condition.

The body will be cremated at his native Babhalgaon village in Latur district tomorrow. It will be brought to Latur tomorrow and kept at his house in Babhalgaon from 9 am to 3 pm for people to pay their last respects, his brother Dilip Deshmukh, said.

"His heart stopped beating at 1.40 pm. As you know he has been suffering from liver failure which has led to kidney failure and also his lungs were being supported with ventilator and various drugs," the hospital chairman K Ravindranath told reporters.

Ravindranath said the minister was brought into the hospital in a very serious condition.

An attempt to harvest liver from a brain dead donor from a government hospital here last night failed as the man died before doctors could operate on him, hospital sources said.

A team from Global Hospitals, where Deshmukh was admitted on August 6, had planned to retrieve the liver from the 31-year-old donor at the hospital, but he died, forcing them to look for another donor, the sources said.

The former Maharashtra Chief Minister had shown signs of improvement and been on and off the ventilator before being prepared for a transplant.

Both Houses of Parliament were adjourned for the day as a mark of respect to the departed leader.

His death was announced by Home Minister Sushilkumar Shinde in the Lok Sabha.

Deshmukh was a member of Rajya Sabha and minister without portfolio. Earlier, he was minister for Science and Technology, Earth Sciences and Micro, Small and Medium Enterprises. After he fell ill, his portfolios were given to Vayalar Ravi.

Beginning his political journey as 'Sarpanch' of Babhalgaon village panchayat in 1974, Vilasrao Dagadojirao Deshmukh negotiated the choppy political waters of Maharashtra with elan, becoming chief minister twice before moving over to Delhi as a member of the Union cabinet.

Hailing from the politically dominant Maratha community, Deshmukh, a graduate from the ILS Law College, Pune, was a grassroots Congress worker, who proved his mettle at all stages in his impressive political career.

Deshmukh was elected to the Maharashtra Legislative Assembly for the first time in 1980 and followed it up with victories in 1985 and 1990.

His political sagacity landed him the coveted chief minister's chair for the first time in October, 1999. He continued in the post from October 18, 1999 to January 17, 2003, when he had to make way for Sushilkumar Shinde, amid growing factionalism in the state Congress.

Amid mounting public outrage over the 26/11 Mumbai attacks in 2008, Deshmukh resigned owning moral responsibility and shifted to Delhi taking the Rajya Sabha route.

Like most politicians, controversies did not spare him too. Deshmukh provoked indignation and was accused of "terror tourism" when he visited the fire-ravaged Taj hotel with actor son Riteish and filmmaker Ram Gopal Verma soon after the 26/11 carnage.

Though not an accused, Deshmukh was also under the scanner in the Adarsh housing scam for giving various clearances to the controversial housing society as chief minister.

President Pranab Mukherjee, Prime Minister Manmohan Singh, Congress president Sonia Gandhi and a host of leaders across the political spectrum paid rich tributes to Deshmukh, describing him as a trusted colleague and able administrator. Here are some of the reactions --

Deshmukh was a towering leader of Maharashtra and said his immense contribution to the welfare of the state as Chief Minister will always be remembered. In his passing away, the nation has lost a personality who was always in touch with the grassroots of society.
--Pranab Mukherjee, President

Mr Deshmukh was a trusted colleague and an able administrator who worked at panchayat, state and central levels with admirable dedication.
-- Manmohan Singh, Prime Minister
It is (with a ) profound sense of grief that we announce the tragic demise of Deshmukh and we extend condolences to his family members.
-- Sonia Gandhi, UPA Chairperson
His untimely death is a loss for all of us. He was one of the leaders with contact among the masses and a huge fan following,
-- Renuka Chowdhary, Congress Spokesperson

Deshmukh was an able administrator, a mass leader and distinguished parliamentarian. People of Maharashtra will never forget the work done by him for the benefit of the state. Deshmukh had special interest in the development of Marathwada and Vidharbha. The Mihaan project went ahead because of his sincere efforts.

Sad to know about the demise of Shri Vilasrao Deshmukh. May his soul rest in peace. My condolences to his family.
-- Narendra Modi, Gujarat Chief Minister
His death has caused irreparable loss to politics and society. I pray that God will give enough strength to his family and followers in this hour of sorrow.
-- Nitish Kumar, Bihar Chief Minister
The death of Vilasrao is a great loss to Maharashtra, the Congress party and the Union government. In the death of Mr Deshmukh, I lost a very good friend.
-- N Kiran Kumar Reddy, Andhra Pradesh Chief Minister
The “socio-political march” from panchayat to Parliament of the former Vilasrao Deshmukh would remain ever memorable.
-- Arjun Munda, Jharkhand Chief Minister
In Deshmukh's death, we have lost an able politician, administrator and a dedicated social worker. As a Union minister and Maharashtra Chief Minister, he had made significant contribution to the country and his death was an irreparable loss to the nation.
-- Tarun Gogoi, Assam Chief Minister

May God give strength to the departed Union minister's family members, relatives and supporters to bear with the loss of Deshmukh.
-- Lalu Prasad Yadav, RJD

In his life time he played a crucial role in the Indian National Congress.As a member of the Rajya Sabha, representing Maharashtra, he brought a quiet dignity to his role in the Upper House. As a Chief Minister, he steered his State with sagacity and a maturity which was appreciable. I offer my sincere and heartfelt condolences to his family and pray that the Almighty may give them the strength to cope with this irreparable loss.
-- Jayalalitha, Tamil Nadu Chief Minister

I never expected this to happen. We always felt he was bound to improve. He was a great leader from Maharashtra. My father S B Chavan and he were very close.
-- Ashok Chavan, Former Maharashtra CM

It is a big jolt to the Congress. We learnt a lot from him.
--Manikrao Thakre, Maharshtra Congress Chief

Deshmukh had contributed a lot for welfare of the people. In his passing away, the country had lost a great parliamentarian and a sincere friend of the people.
-- Omar Abdullah, J&K Chief Minister
We have lost a generous and charismatic leader. It's a big loss to our State. I have lost a friend.
-- Prithviraj Chavan, Maharashtra Chief Minister

Deshmukh was a very sensitive and amicable person, who did many developmental works in Maharashtra and in the country.
-- Shivraj Singh Chouhan, Madhya Pradesh Chief Minister

Deshmukh was dedicated for the welfare of the people. His works as Maharashtra Chief Minister and as Union Minister will always be remembered.
-- Digvijay Singh, Congress General Secretary
Deshmukh was an efficient leader and administrator. He undertook different developmental programmes both as chief minister of Maharashtra and as a union minister.
-- Naveen Patnaik, Odisha Chief Minister

It is hard to believe (that Deshmukh is no more)...A joivial man has left us. He was not that old.
--Bal Thackeray, Shiv Sena
Continue FREE with Ads Pay Rs. 1 to Read Without Ads
READ MORE IN:
Vilasrao Deshmukh National
Next Story : V.K. Singh Pitches for Right to Recall of Politicians
Download the Outlook ​Magazines App. Six magazines, wherever you go! Play Store and App Store