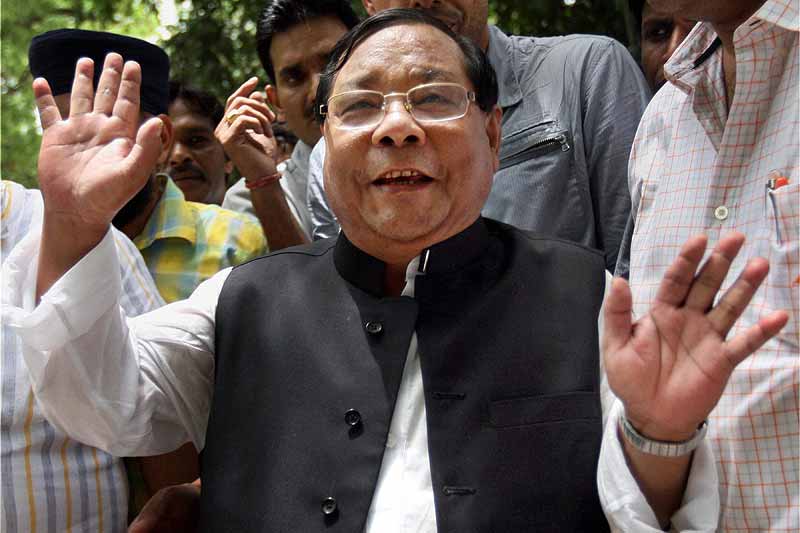 Former Lok Sabha Speaker P A Sangma, who had a chequered political career in which he constantly shifted allegiance in the last two decades, died here today following a massive heart attack.

68-year-old Sangma, who was elected nine times to Lok Sabha from Tura in Meghalaya and who became the first Speaker from the North East, breathed his last here this morning.

The news of his death was broken by Lok Sabha Speaker Sumitra Mahajan, who made obituary reference to him and adjourned the house for the day as a mark of respect.

Later setting aside protocol, the Rajya Sabha also adjourned after lunch for members to pay homage to Sangma, whose body will be taken to his home in Meghalaya.

Sangma leaves his wife Sorodini, two sons--Conrad, a former finance minister in Meghalaya, James, a sitting MLA, and daughter Agatha, who was the youngest minister in Manmohan Singh's ministry when she was inducted in 2009.

In the 11th Lok Sabha, shortage of numbers forced the BJP to accept Congress candidate Sangma as Speaker after Atal Bihari Vajpayee was sworn-in as Prime Minister at the head of a short-lived 13 day government.

An affable and convivial personality, Sangma had friends across parties. After a long stint in the Congress when he became a minister of state in the Rajiv Gandhi government in 1984, he later rose to become the Labour minister in Narasimha Rao's Cabinet.

Sangma was among those who rose in revolt against Sonia Gandhi's foreign origins in 1999 along with Sharad Pawar and Tariq Anwar to form the Nationalist Congress Party, which he left to join Trinamool Congress.

Later, he split with the TMC and formed his own National People's Party on whose ticket he was elected to the current 16th Lok Sabha.

In 2012, Sangma exited from NCP to become the official candidate of BJP against Pranab Mukherjee in the Presidential elections.

While expressing deep grief over Sangma's passing away, Mahajan said he knew how to run the House with a smile and "I learnt this from him."

"A man of masses, Sangma strove relentlessly for the amelioration of the marginalised sections," the Speaker said.

Condoling the death of Sangma, Prime Minister Narendra Modi said he was "a self-made leader whose contribution towards the development of the North East is monumental. Saddened by his demise".

Sangma's tenure as Lok Sabha Speaker "is unforgettable. His down-to-earth personality and affable nature endeared him to many," he said, adding "Sangmaji was deeply influenced by Netaji Bose".

Born on September 1, 1947 in village Chapahati in the picturesque West Garo Hills District of Meghalaya, Sangma grew up in the small tribal village and struggled hard to rise in life.

After completing his graduation from St Anthony's College, he went to Dibrugarh University in Assam for his Masters degree in International Relations. Subsequently, he also obtained a degree in Law.

One of the founding members of the Nationalist Congress Party (NCP), Sangma was expelled from it in July 2012 when he refused to accept his party's decision to quit the race for India's President. In January 2013, he had formed the National People's Party.

As Speaker, Sangma was known to disarm agitated members with his spontaneous wit, affable disposition and a sense of impartiality.

From a humble beginning in a small tribal village in Meghalaya, Sangma became a Lok Sabha member at the age of 30 from Tura constituency on a Congress ticket in 1977 at a time when the nation was witnessing a major political upheaval with the Congress losing power for the first time since Independence.

In less than two years, the Janata Party went out of office and the Charan Singh government lasted but a few months.

In the mid-term Lok Sabha elections in 1980, the Indira Gandhi-led Congress returned to power at the Centre and Sangma was re-elected from the same constituency.