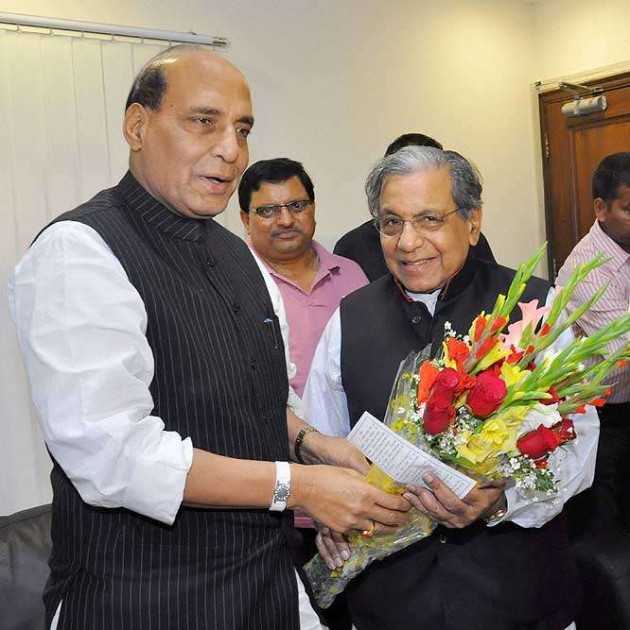 Former bureaucrat and JD(U) MP N K Singh today joined BJP saying a government led by the saffron party can usher growth revival and progress to replace the prevailing "atmosphere of gloom" with "optimism and hope".

"I believe that the BJP led NDA government can give a new and fair deal to India," he said after joining the party.

Singh, who had a fall out with Bihar Chief Minister Nitish Kumar after denial of a Rajya Sabha renomination to him, said only the BJP can provide a strong and stable government with credible leadership in the present political scenario.

A former IAS officer of 1964 Bihar cadre, Singh had worked in the prime minister office of Atal Bihari Vajpayee's regime and was also then member of Planning Commission.

Singh hit out at the JD(U) saying its governance matrix has got "distorted" to exclusively focus on a "survival- centric strategy than a development-centric strategy" that forced him to quit.

"India faces serious economic and political challenges as a consequence of the lost decade that we are struggling to overcome. We need a strong and stable government to rejuvenate our sagging morale. Only the BJP can provide the purposive and resolute policies, programmes and leadership in the current scenario.

"I believe that only an NDA government led by the BJP can usher a new India reviving the engines of growth and progress and replace the prevailing atmosphere of gloom with optimism and hope," he said.

Singh backed Narendra Modi, saying there are only allegations against him and the principal allegation has been disproved by the court verdict and it is the final verdict unless it is set aside under the law of the land.

Singh, who was inducted in BJP at party president Rajnath Singh's residence, said he has joined the saffron party "unconditionally" and said he has offered himself for any task given to him by the party leadership.

He tendered his resignation from the JD(U) yesterday and wrote a letter to Nitish Kumar, pointing out the infirmities in the decision making process in the party.

Singh said his joining BJP is a reaffirmation of his trust and confidence in the progress which India achieved during the NDA period which laid the foundation for strengthening infrastructure and improve macro-economic environment, the gains of which were harnessed by the UPA which came to office.

"Today, as the nation clamours for change and to revive our national economy it is looking for credible leadership which only the BJP has in ample measure," he said.

Among others who joined BJP include former chairman of the Delhi Bar Council R S Goswamy and Mohammad Ejaz Ilmi, brother of AAP leader Shazia Ilmi.

Ilmi said he was willing to campaign anywhere the party asked him to and criticised the AAP leadership for their policies.