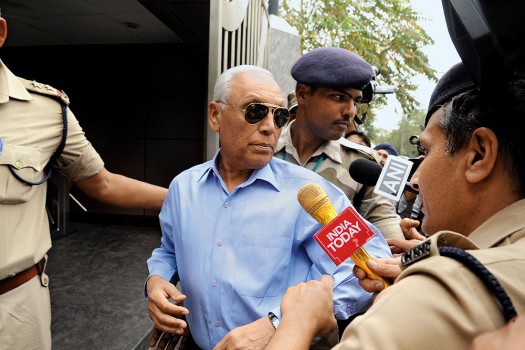 The CBI had also arrested Tyagi's cousin Sanjiv and a Chandigarh-based lawyer Gautam Khiatan on Friday.

This is for the first time a former IAF chief has been arrested by the central probe agency. The 71-year old Tyagi, who retired in 2007, was called for questioning at the CBI Headquarters along with the other two.

These are the first arrests in the sensational AugustaWestland case. The arrest has come three years after the CBI registered an FIR in 2013 to probe the allegations. The details of the scam emerged in Italy where the prosecutors levelled allegations of corruption in the deal against the chief of Finmeccanica, the parent company of the UK-based AgustaWestland.

In a statement on Friday evening, CBI spokesperson Devpreet Singh said, "It was alleged that Chief of Air Staff (CAS) entered into criminal conspiracy with other accused persons and in 2005, conceded to change IAF's consistent stand that service ceiling of VVIP Helicopters 6000 mtrs was an inescapable operational necessity and reduced the same to 4500 meters."

"It was revealed during investigation that such undue favours were allegedly shown to said UK-based private company by accepting illegal gratification from the accused vendors through middlemen/relatives including his cousin and an advocate etc. Who accepted the illegal gratification for exercising influence through illegal means, or using personal influence over the concerned public servants," CBI Spokepserson said.

However, Tyagi and his cousin had strongly denied having taken any bribes to influence the deal. Rejecting the allegations, Air Chief Marshal Tyagi had said the change of specifications, which brought AgustaWestland into contention, was a collective decision in which senior officers of Indian Air Force, SPG and other departments were involved.