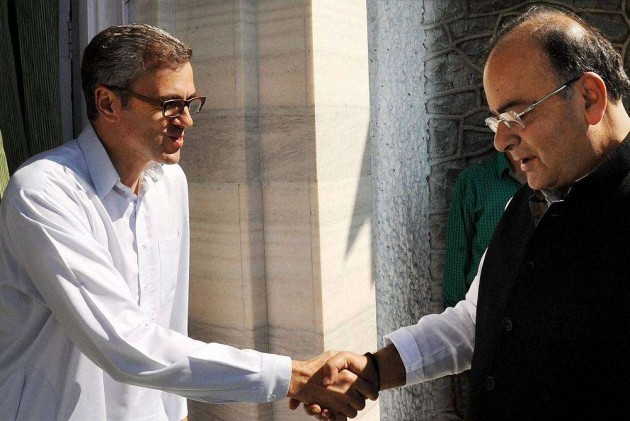 On his maiden visit to Jammu and Kashmir after assuming charge, Defence Minister Arun Jaitley today said the nation's armed forces are capable of responding to truce violations by Pakistan as he discussed the state's security scenario with Omar Abdullah and top army officials.

Jaitley, who is accompanied by Army Chief General Bikram Singh, was briefed by local Army officers about the security situation along the Line of Control and the counter-insurgency operations in the hinterland.

"The Defence Minister visited Headquarters of Chinar Corps where he was given a comprehensive briefing on overall security situation in the Kashmir Valley including the counter-infiltration grid along the LoC and counter-terrorism grid in the hinterland," a defence spokesman said.

Earlier on his arrival here on a two-day visit to the state, Jaitley said the country's armed forces are capable of responding to ceasefire violations on the Line of Control by Pakistan.

"Our forces are capable of responding to it," he said when asked about truce violations, including the one ahead of his visit to the state, by Pakistan.

Chief Minister Omar Abdullah called on the Defence Minister during which the two leaders discussed the prevailing security scenario in the state.

"Had a very productive meeting with Arun Jaitley in Srinagar this afternoon. Discussed matters related to both defence and finance with him," Omar wrote on Twitter.

After the meeting, an official spokesman said the two leaders discussed the current situation on the LoC during the hour-long meeting.

"Matters relating to preparedness of the state government to conduct upcoming Amarnath Yatra smoothly also came up for discussion," he said.

The Chief Minister shared with Jaitley, who is also Union Finance Minister, certain financial matters relating to the development plan of Jammu and Kashmir, the spokesman said.

The Defence Minister will visit forward areas along the LoC tomorrow and will interact with commanders and troops, the spokesman said.

He said Jaitley will also chair a special security review meeting here tomorrow which will be attended by top officials of the administration, police, army and para-military forces.