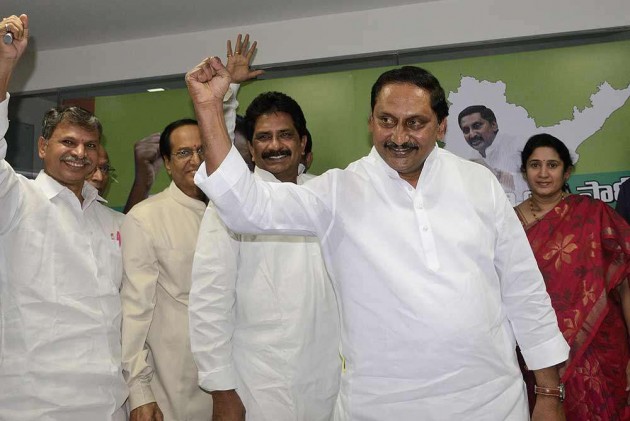 Moving swiftly after the launch of his party on the 'unified Andhra Pradesh' plank last week, Reddy made the announcement at a function in Visakhapatnam.

"JSP has got the approval of the Election Commission to use footwear as its poll symbol," a party official said.

According to a statement issued by the party, footwear was chosen as the symbol as it not only bears the burden of the wearer, but also protects.

"Footwear is also a sign of equality as it offers similar protection to everyone, irrespective of religion, caste, creed or class," it said.

Besides, footwear is owned even by the poorest of the poor, the party said recalling that the footwear of Lord Rama inspired Bharat in achieving 'Rama Rajya'.

Reddy, who quit as Chief Minister in protest against state's division, launched JSP on March 12 during which he had symbolically displayed a piece of the wall which was broken for the unification of Germany to drive home the point that Seemandhra and Telangana can come together again.

The Lok Sabha and Legislative Assembly elections are scheduled to be held simultaneously in undivided Andhra Pradesh on April 30 and May 7.

Meanwhile, Reddy held a meeting with a group of IT professionals here yesterday. He plans to undertake interactions with other sections of the society in Seemandhra to reach out to them in the run-up to the polls.

Speaking in Visakhapatnam, Reddy said UPA and Congress high command had disrespected the sentiments of Seemandhra people by dividing the state.

The party symbol footwear (chappal) was unveiled by the hands of a five-year-old girl during an interactive session between Reddy and students.

"This party is not for my sake. It is people's party... who fought for the united Andhra state," Kiran said.

The former Chief Minister alleged that TDP chief N Chandrababu Naidu and YSRCP clandestinely supported the division of the state.

In the forthcoming elections, he said, "Everyone must think whether the vote is for the people who fought for the united Andhra Pradesh or those who supported the division."

"Chandrababu Naidu did not do anything for the development of Hyderabad except establishing Hi-tech city," Reddy alleged.

He further claimed that the state had became debt-ridden under the TDP rule.

115 million units of power were required for Telangana, as against 57 million units generation capacity in the region, Kiran said, contending that the division was not going to be beneficial.

Rajahmundry MP V Arun Kumar, who also spoke on this occasion, said the Congress high command had disrespected Telugu people and students should teach a fitting lesson to Congress in the elections.