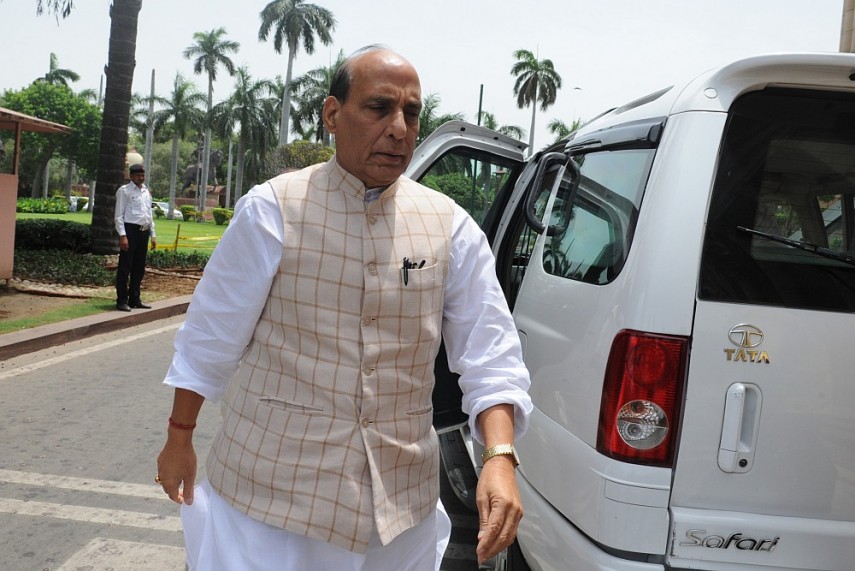 Home Minister Rajnath Singh today ordered Delhi Police to set up a special team to trace a missing JNU student even as its Vice Chancellor and some other top officials were allowed to leave their offices after being under siege by agitating students for over 20 hours.

The agitating students, who have been accusing the JNU administration of not doing enough to trace missing student Najeeb Ahmed, said they have not softened their stand and allowed VC M Jagadesh Kumar and others to leave their offices only to attend a scheduled meeting of the Academic Council.

As the students' protest over the missing student entered the sixth day, the Home Minister directed the Delhi Police to set up a special team to trace Najeeb who went missing on Saturday following a brawl with a group of ABVP supporters in a JNU hostel.

Singh called up the Commissioner of Delhi Police and gave the instruction to set up the special team.

The students did not allow the VC and around 12 other officials to come out of the administrative building since yesterday afternoon as part of their protest though mediapersons were allowed to go inside it.

JNU teachers association, which have been supportive of the students on most of the issues, criticised the confinement of the VC and others. The VC had this morning warned the students of strict action over the "illegal confinement".

Coming down heavily on protesting students, the VC said several rounds of talks were held to convince the students about sincerity of the university authority to locate Najeeb but they were continuing with their "illegal" activities".

"This is a university run in a democratic manner. We value debate and discussion. That's why we had several rounds of discussions with the students to convince them that the university is sincerely working to locate Najeeb Ahmed.

"We have tried by every possible means to convince the students that we are trying our best to locate Najeeb. However, they are not relenting and resorting to this kind of illegal means," Kumar said hours before he was allowed to go.

He said, "We cannot be coerced by these illegal means. The university has to be run in a proper manner and the academic activities should not suffer. We again appeal to the students not to resort to this kind of illegal activities which will affect the university."

Rejecting allegations of inaction, he said the administration had written to the police about the missing student and an inquiry by the university will be expedited and "guilty" punished.

Commenting on the issue, Minister of State for Home Kiren Rijiju, said, "It is wrong to confine VC and other officials. Some students have come in JNU to do politics and not study. All activities should be done within the law."

An FIR for kidnapping and wrongfully confining a person was lodged at Vasant Kunj North police station after the police received a complaint from the student's guardians.

Meanwhile, the blame game between the Left-affiliated groups and RSS student wing ABVP also continued with the latter denying any involvement in missing of Najeeb.

JNU students union president Mohit Pandey said, "He has gone missing after the scuffle with ABVP members. They definitely know about his whereabouts. We have allowed the officials and VC to attend the AC meeting but this does not mean end our deadlock with the administration. We will continue with our agitation till he is traced".

Alok Singh, President of JNU's ABVP Unit, said, "From the beginning of the issue, they have been claiming that ABVP has a role in this.

"We have nothing to do with this. We had our suspicion on Qasim who is Najeeb's roommate and had even demanded action against him in the past".