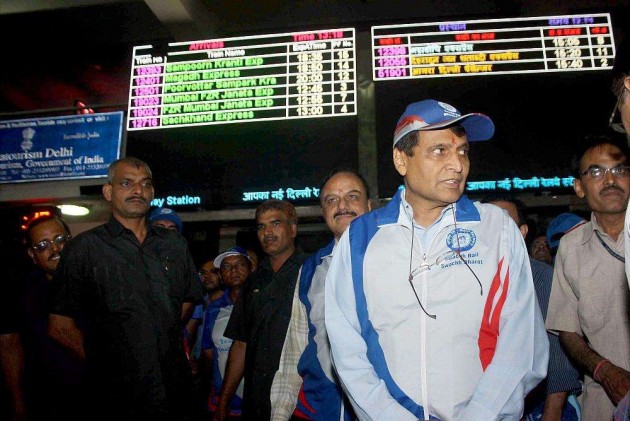 Two trains derailed near Harda in Madhya Pradesh as the tracks were washed away by flash floods due to heavy rains, claiming at least 12 lives and injuring 25 others, Railway Minister Suresh Prabhu said today.

Making a suo motu statement on the incident in both Houses of Parliament, Prabhu said, "the prima-facie cause of the incident is stated to be flash floods due to heavy rains."

"As per available information, 12 passengers lost their lives and 25 sustained injuries in this unfortunate incident," Prabhu said, adding that while 11 bodies were recovered from the Rajendra Nagar-Mumbai Janta Express, one was recovered from Mumbai-Varanasi Kamayani Express.

"The exact number of casualties are still being ascertained," he said. However, the toll has been put at 24 by a Madhya Pradesh government spokesperson at the accident site.

The Minister said a statutory inquiry has been ordered and the Commissioner (Safety) will conduct the probe.

Maintaining that Railways was making all possible efforts to rescue the affected passengers, he said he along with junior minister Manoj Sinha will be "going personally" to the accident site to review relief and rescue operations.

Prabhu said the accident occured at 2350 hours last night and he, along with Chouhan, coordinated the rescue and relief operations throughout the night.

Giving details, he said Train No. 11071 DN Mumbai- Varanasi Kamayani Express and Train No. 13201 UP Rajendra Nagar-Mumbai Janta Express derailed between Khirkiya and Bhirangi stations on Khandwa-Itarsi section of West Central Railway at about 2330 hours on Tuesday.

"While the Train No. 11071 DN Kamayani Express was on run in block section between Khirkiya and Bhirangi stations, its 11 coaches derailed due to track wash out at km 648/01. At the same time, Train No.L 13201 UP Janta Express which was coming from opposite direction on UP track, also derailed at Km 647/03-04," he said.

Relief trains along with Accident Relief Medical Van(ARMV) was immediately despatched from Itarsi which reached Bhirangi station at 0220 hours this morning. Another ARMV reached Khirkiya station at 0325 hours.

Prabhu said an enhanced ex-gratia of Rs 2 lakh each to the next of the kin of deceased, Rs 50,000 to grievously injured and Rs 25,000 to persons who sustained simple injuries has been announced.

"Helpline Numbers have been set up at all important locations and Railways have been instructed to take all precautions in flood affected areas," the Minister said.

In the Rajya Sabha, Prabhu made the statement soon after the House mourned the death and injuries in the accident.

Minister of State for Parliamentary Affairs Mukhtar Abbas Naqvi said the Railway Minister would like to apprise the House about the facts of the accident.

But Congress members, who have since yesterday been protesting against the suspension of 25 of their colleagues by Lok Sabha Speaker, rushed into aisles raising slogans against the Government and its "dictatorial" attitude.

Amid pandemonium, Leader of the House Arun Jaitley egged on Prabhu to make the statement.

Prabhu then started reading out from what appeared to be a full-page statement but the continued slogan shouting drowned his voice.

Chairman Hamid Ansari asked the protesting members to allow the minister to make the statement.

Leader of the Opposition Ghulam Nabi Azad was seen calming down Congress members as Prabhu hastily said he and his ministerial colleague are going to the accident site. Soon thereafter, Prabhu left the House.

Earlier, when the House met for the day, Ansari mentioned the accident saying the "loss of innocent lives is indeed painful and sad."

The members stood in silence as a mark of respect to the memory departed.

Continue FREE with Ads Pay Rs. 1 to Read Without Ads
READ MORE IN:
Suresh Prabhu National
Next Story : US Committed to Seeking Justice on Behalf of All 26/11 Victims
Download the Outlook ​Magazines App. Six magazines, wherever you go! Play Store and App Store