Fight Against Climate Change Is Responsibility of All: PM 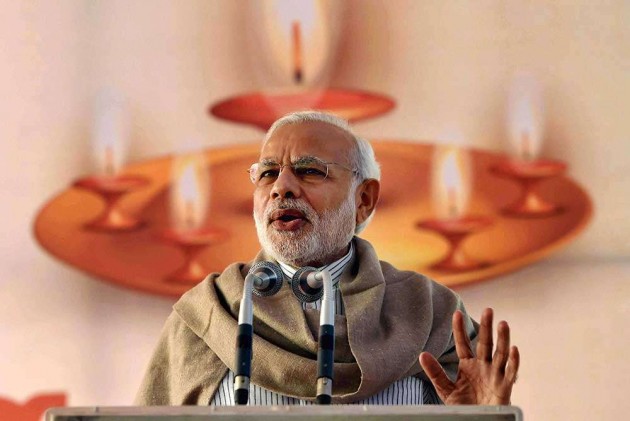 Print
A
A
A
increase text size
Outlook November 29, 2015 17:31 IST Fight Against Climate Change Is Responsibility of All: PM

Preparing to attend the world meet on climate change in Paris tomorrow, Prime Minister Narendra Modi today said it is the responsibility of all to ensure that the Earth's temperature does not rise as global warming is already creating disasters like recent heavy rainfall in Chennai.

He asked the people to adopt energy conservation and energy efficiency measures like the maximum use of solar-powered items.

In his monthly radio programme 'Mann Ki Baat', Modi recalled his proposal for setting up a SAARC disaster response mechanism and said the recently-held 'table talk exercise and best practices seminar' in Delhi was a good beginning in this regard.

"We keep receiving news about the natural disasters from every corner of the world. Such are the tragedies which have never been heard earlier or imagined. We are now experiencing the impact of fast-changing climate. In our own country, massive rains recently hit Tamil Nadu and caused losses to it as well as other states. Several people lost their lives. I offer my condolences to them," he said.

"The whole world is worried about climate change. There are discussions everywhere over it and concerns are being expressed. There is acceptance for it (climate change) as an index before any work is done. The temperature of the Earth should not increase now. It is the responsibility and concern of all," he said in his 20-minute programme.

His emphasis on the responsibility of all assumes significance as the developed world is placing greater onus on developing nations like India in the fight against climate change.

India has been maintaining that the developed countries have been the major polluters over centuries and should assume greater role in fighting global warming by funding and transfering low-cost technology to developing nations.

The Prime Minister asked people to adopt measures for energy conservation and energy efficiency so that global warming is avoided.

The government is running a number of schemes, like LED bulbs, Modi said, asking people to take advantage of these.

Giving examples of how some common people are contributing in their own way, he cited the case of one Noor Jehan of Kanpur who is apparently not much educated but has set up a factory of solar 'lalteins' (lamps).

These 'lalteins' are rented out to about 500 households for Rs 100 each per month while the charging costs about Rs 3-4 daily, he said.

Hailing Noor Jehan, Modi said she is working as per the meaning of her name -- 'giving light to the world'. "Her work can be an inspiration for all those want to fight climate change," he added.

While talking about Chennai rains and the disaster caused there, the Prime Minister said while the state government is trying to tide over the situation, the Centre is working shoulder-to-shoulder with it.

A central team has gone to Tamil Nadu to assess the damage, he said while expressing confidence that the state will keep moving forward despite this crisis.

In the context of climate change, a caller from Jalandhar highlighted the problem of burning of crop residue.

Responding to this, Modi said the problem was not confined to Punjab and Haryana but it was there all over the country as farmers find it to be the easiest way to dispose of the crop residue.

He asked farmers to have a rethink on this while telling them that the residue can be used as fertiliser as has been done by many from the agriculture community.

Modi noted that till about 15 years back, the natural disaster was seen only in the context of crop failure due to drought. "But now its form has changed. We have to build capacities at all levels. Civil society, citizens and small organisations will have to build scientific capacities."

He recalled that after Nepal earthquake earlier this year, he had called up Pakistan Prime Minister Nawaz Sharif and proposed that all SAARC nations should have a joint exercise for disaster preparedness.

"I am happy that a 'table talk exercise and best practices' seminar was held recently in Delhi. This is a good beginning," the Prime Minister said.