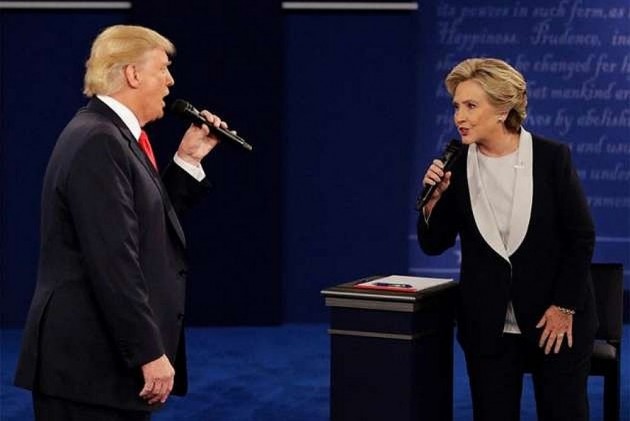 Print
A
A
A
increase text size
Outlook May 03, 2017 11:39 IST FBI Director Comey Was Best Thing to Happen to Clinton: Trump

US President Donald Trump has said FBI Director James Comey was the "best thing" that ever happened to his Democratic presidential rival Hillary Clinton ahead of the last year's general elections.

Trump's remarks came hours after Clinton said in an interview that Comey, Wikileaks and Russian hackers were responsible for her defeat.

He said the Democrats had used the "phony" Russian hacking story as a justification for their loss in the November 8 presidential elections.

"FBI Director Comey was the best thing that ever happened to Hillary Clinton in that he gave her a free pass for many bad deeds!" Trump, 70, said in a late night tweet.

"The phony... ...Trump/Russia story was an excuse used by the Democrats as justification for losing the election,” he said in another tweet.

Clinton, 69, has blamed the FBI for her loss at the hands of Trump, claiming the decision to revive the probe into her email accounts stopped her momentum towards a historic win.

She has said that her campaign was winning until Comey wrote a letter to the Congressional leadership that they have reopened the investigations into the email scandal.

Two days before the elections, the FBI again sent a letter to the Congressional leadership that it did not find anything new in the investigation that was primarily screening of some 650,000 emails that it found in a laptop of one of her aide Huma Abedin, which she shared with her estranged husband Anthony Weiner.

Clinton's campaign manager Robby Mook has claimed that Comey's letter in the last 11 days of the election both helped depress the democrat's turnout and drove away some of its critical support among college-educated white voters particularly in the suburbs.

Trump has repeatedly claimed that Democrats have focused on Russian hacking and alleged cooperation between Moscow and Trump associates to mask their bitter defeat.

He was elected after one of the most bitter and divisive campaigns in the history of US elections.