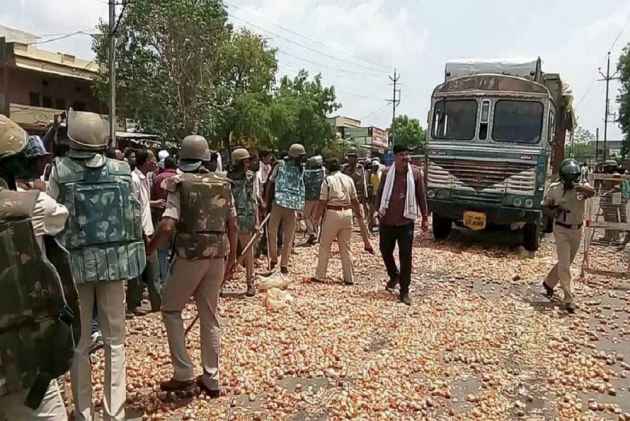 Farmers on Friday gathered at various places and blocked national highways in Haryana and Rajasthan as part of their nation-wide stir against the death of five cultivators in police firing in Madhya Pradesh and failure of the Centre to provide relief to the farming community.

Following which authorities had to divert the traffic at some places.

Singh said that the farmers will block vehicular traffic for three hours during afternoon on all national highways across Haryana.

He, however, asked the farmers to protest in a peaceful manner and let ambulance and fire brigade vehicles to pass the blockade.

A group of 62 farmers’ unions had announced that it will block traffic for three hours on all national highways across the country today.

Singh said the decision to block traffic was taken to protest the killing of five farmers in police firing in Mandsaur in Madhya Pradesh and alleged failure of the government to provide relief to the farming community. The farmers are also demanding waiver of loans and implementation of Swaminathan Committee report on payment of the minimum support price (MSP).

The opposition parties, including Congress and Indian National Lok Dal (INLD), have also lent their support to the agitating farmers.

Meanwhile, INLD workers burnt the effigy of Madhya Pradesh Chief Minister Shivraj Singh Chouhan near mini secretariat in Panipat, under the elevated flyover which is part of national highway, to protest the firing on farmers in Mandsaur in which five farmers were killed.

In view of the farmers' protest, the Haryana police has taken necessary steps to deal with the situation.

Haryana Director General of Police, B S Sandhu had yesterday said that stringent security measures have been taken in the state in view of the protest.

Four companies of the Central Reserve Police Force (CRPF) have been deployed in Ambala, Kurukshetra, Sonepat and Jind.

Singh said it was unfortunate that the BJP had failed to fulfill their poll promise of implementing the Swaminathan Commission report.

"Swaminathan Commission report should be be implemented without any delay and all kinds of loans of farmers across the country should be waived off," he added.

Singh also said that on International Yoga Day on June 21, "the farmers will stage protests to attract attention of the entire world towards their plight."

Meanwhile, in Rajasthan, cultivators blocked Ganganagar- Hanumangarh highway as part of their protest.

The highway will remain blocked for three hours, starting 12 noon, in support of the demands of wavier of all farming loans, profitable minimum selling price (MSP) for all crops among others.

Former CPI(M) MLA Pawan Duggal claimed that a large number of farmers have taken part in the blockade.

Police have also made necessary arrangements on the highway in the wake of protest.

Apart from this, Kisan Mahapanchayat will hold demonstrations in villages in Rajasthan, national president of Mahapanchayat Rampal Jat told.